The Devil Takes a Bride (The Cabot Sisters, #2)

Four Stars
original post at http://ramblingsfromthischick.blogspot.com
First, I want to say… I’ve started many Julia London books and have not finished them because she writes about things and events that are so uncomfortable. I’ve abandoned some of her books in the past. So… I was a little worried about delving into this story but at the same time I was interested in how she would play out the plot. This is the second book in the series and I have not read the previous one. Based on what I gathered from this story the predicament that Grace faces is the same as her sister in the previous book. But since I didn’t read it the storyline felt fresh to me.

One of the issues I have with London is I never “love” her hero and heroine… and when I began this story I had that familiar feel. Grace Cabot is the toast of London society at the beginning of the book. Through a series of events her step-father dies and her mother is going “crazy”. Based on the symptoms it seems she is dealing with dementia or Alzheimer’s. Because she has younger sisters she is very worried that news will spread about her mother’s disease and it will scandalize the family, thus making it difficult for the sisters to marry. She enjoys a flirtation with the main characters brother, Lord Amherst at the beginning of the book but it never leads to anything. She goes to Bath and learns that the younger brother Lord Amherst is there and comes up with a scheme to lure him into being caught with her. Grace realizes that everything has to be perfectly timed. So when he enters she goes to kiss him and discovers that it’s Geoffrey, the Earl of Beckington, who shows up and not his brother. Needless to say they end up married.

So… I didn’t really care for Grace at the beginning of the book. I found her to be shallow and manipulative-she is basically planning to trap a man into marriage. I did start to like her more as the story progressed because she really made an effort to make her marriage work. I did have a problem with her attitude. Once they are married she asks Geoffrey if they are going to have a real marriage or if he is going to hate her forever. Whereas I understand her willingness to make the marriage work, she did just trap him to the alter and he was almost accused of raping her. I would assume that Geoffrey might have some hard feelings and issues trusting her when he knew her for less than five minutes when all this occurred.

Geoffrey was such a complicated and layered character that in many ways he was why I liked the book. Geoffrey is very, very, very meticulous. He likes everything a very specific way and has very specific rules for symmetry and where things are located. As we get to know Geoffrey it’s apparent that he suffers from Obsessive Compulsive Disorder (OCD). At first his need for control and very precise environment. Everything has to be in 8’s. At first, Grace has a difficult time getting to know her husband. She can’t understand his need for control and she really doesn’t learn about his situation until almost the end of the book. Grace sees it as him pushing her away and trying to punish her for what she did.

There were a couple of things that bothered me. One was their coming together as husband and wife. Their intimate moments were so difficult to read I thought I was not going to be able to get through them. Also, even though people were not comfortable around Geoffrey he never seemed “devilish.” He was actually very responsible and kind to the people around him. But, and this is a big but, I really loved how the author developed these two characters. I thought she was honest and authentic in how their relationship developed. Both of them had to overcome trusting each other and letting down their vulnerabilities. There is a part where Grace explains to Geoffrey that she will never be perfect. I thought that scene was so beautiful. So very well done! I was also very impressed with how the author didn’t make Lord Amherst a dead beat rogue. I really liked how she developed him and his storyline. I imagined it going one way and she went a completely different direction-which I loved. I’m glad I stuck through with this book. I found it to be very rewarding and it’s a book that made a big impact on me and I will remember. I’m sure Julia London fans will love it. 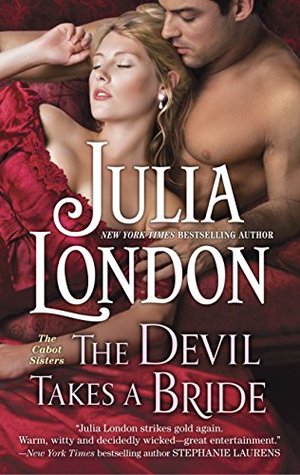