A little bit of background: Lady Cassandra is friends with Lady Lucy Upton who was in the heroine in the first book. Where Lucy is straightforward and doesn’t hold back Cassandra is shy and timid. They are also friends with Jane Lowndes who is a bluestocking. The friendship between the three heroines is very entertaining because they can’t help but get into trouble at every twist and turn.

Cassandra has been in love with her cousin’s fiancé for many years-Julian. So in love that she correspondence with Julian without him knowing it’s her. Julian returns from war and he is eager to break off his engagement but he stops off at a house party first. At this house party Lucy comes up with a plan to disguise Cassandra as Patience Bunbury.

I have a couple of confessions to make. First, I wanted to love this story and I didn’t. I hate that I didn’t because I loved the previous book so much. One of my issues was that Cassandra and Julian don’t meet until 30% of the book. I personally love to see if characters have chemistry from the beginning. Lucy and Derek were so hilarious and they were so much fun I anticipated the same friction. The first part of the book is Lucy scheming of how to set up Cassandra and Julian. Another part was that the whole plot seemed really silly and it was really disappointing. The girls introduce Cassandra as this fictional person in the hopes that what? How was Julian going to fall in love with Patience and then be ok with her really being Cassandra the real person that corresponded with him? I know the plot was intended to be cute but it seemed to me to be ridiculous.

Also, although there were some funny and cute moments, Cassandra and Julian didn’t overly impress me as a couple. They did build a friendship all those years ago writing back and forth with one another but I was not impressed with Cassandra’s willingness to present herself as someone else. I also didn’t like when she would question Julian about things in his life that she already knew because they corresponded with each other.

So although the story was cute and I enjoyed it… I still felt a little let down. That doesn’t mean I’m not counting down until the next book “The Unlikely Lady.” Jane and Garretts story seems like it will be a lot of fun! So even though this was a little lackluster for me, I do have to add that it has received excellent reviews, I’m still eagerly awaiting the next book! 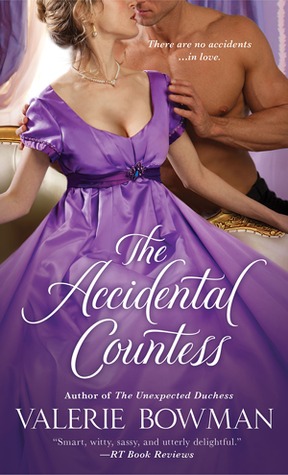