Never Marry a Viscount (Scandal at the House of Russell, #3) by Anne Stuart

Anne Stuart is one of my favorite writers. She has written some of the most villainous, horrible reformed hero’s I have ever read about. So I have very high expectations for her. Anytime I see anything new by her I jump at the chance to read it.

“Never Marry a Viscount” is the final book in the (Scandal at the House of Russell #3) trilogy. I read the first book, “Never Kiss a Rake” but I have not read the second one, “Never Trust a Pirate”. Basically the same plot occurs in all three books. The three sisters, Bryony, Maddie and Sophie are living in disgrace. Their father died and left the daughters ruined. Many believe that he tried to steal money and business from his investors and that he was not actually murdered. The sisters believe otherwise, they know that there was foul play and want to find out who murdered their father. Byrony, the oldest sister believes that Adrian Bruton, Earl of Kilmartyn is the one responsible for her father’s death. Madeleine believes that Captain Thomas Morgan is responsible and Sophie believes that Viscount Griffiths is. All three sisters somehow infiltrated the lives of these suspected murders to uncover the truth.

I liked the idea of the plot I just think that it was over done in the three stories. I would have liked it better if the story lines were not repeated in three books. Sophie was a great character and I really enjoyed her spirit. Griffiths was also a great character but his villainous ways were not really that terrible. He is really just after Sophie the entire book. Granted he was under the impression that her purpose in his household was of a different nature. I personally found the confusion a little to drawn out.

Both Sophie and Griffiths had good chemistry but as I mentioned before, I love Anne Stuart and hold her to a very high standard. Since this is the last book in the series the other sisters make an appearance. The true identity of the murder is also known. I’m looking forward to reading more of Anne Stuarts books! She is still one of my favorite authors. 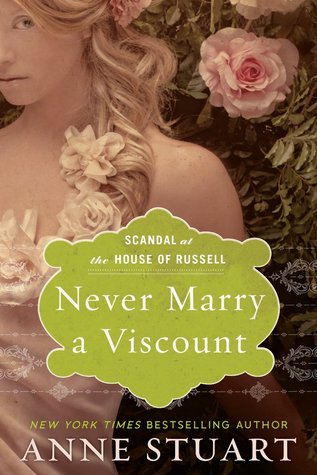