original post at: http://ramblingsfromthischick.blogspot.com
Three Stars
Seven Wicked Nights is a collection of short stories by seven different authors.  The stories are all historical romances.  These authors are all well-known and some of these stories were their earlier work.  I thought this was a nice collection and a great way to experience different authors in one collection.
Unlocked, by Courtney Milan
Three Stars
I read this short story a while back.  It was one of the first introductions I had to Milan.  After reading this I read a lot of her other books.  I loved its originality.   Elaine Warren was a really great heroine.  She is considered a spinster.  All her season she was bullied and harassed by her peers.  One of them Evan Carlton.  When Evan reappears after having left society to mourn the death of his brother he is a very changed man.  Honestly, he was a real jerk before.  Him and his cousin Diana use to harass Elaine because she was really quirky and she has a very unique laugh.  I really liked Elaine but she was definitely a special type of heroine.  Evan realizes that he was a terrible persona and goes out of his way to make amends to Elaine, in the process he can’t help but fall in love with her.  I enjoyed re-reading this short story and was reminded of why I like Milan.  She always tells stories like no other.  Her characters are never perfect but always engrossing.  I liked Elaine and Evan’s chemistry, also.  They really built a friendship and then a relationship and Evan does become a true gentleman.
When I Met my Duchess, by Caroline Linden
Three Stars
This was my first time reading Caroline Linden and it was an enjoyable experience.  The story quickly begins with an upcoming wedding.  The Duke of Wessex’s is about to get married, fortunately or unfortunately things don’t go as planned.  When Wessex meets his fiancé he is more interested in her widowed sister than his intended bride.  Cleo was a fun heroine.  She is happy for Helen and her upcoming wedding.  Cleo is the black sheep of the family.  Her parents don’t approve of her because she eloped with a working man and she runs a shop.  Her parents are quick to disdain her and are really brutal in their treatment of her.  Their only consolation is that Helen will marry Wessex.  Wessex is a proper gentleman and is ready to do his duty but Cleo is really the sister who his attention gravitates to and the woman that interests him.  Even though the both deny it, they are in love with each other.  Cleo and Helen’s parents are none too happy when they realize that Cleo has won Wessex’s heart.  I didn’t think that Cleo and Wessex had great chemistry but they were a sweet couple and it was enjoyable to watch them fall in love.
How to Catch a Wild Viscount, by Tessa Dare (originally published as The Legend of the Werestag)
Four Stars
This was one of my favorite stories in the collection.  I loved the characters and their unfulfilled story.  Luke is a wounded solider.  Years before heading to fight against Napoleon he gives Cecily Hade a kiss.  Throughout the four years he was fighting that kiss kept him sane and fighting to stay alive.  Luke returns a wounded man.  The war has affected him and even though he still loves Cecily he does not think he deserves her.  He goes out of his way to seem indifferent and nonresponsive to Cecily.  When Cecily is in the forest with a hunting party she is attacked by an animal and saved by a mystery man.  It was obvious who the mystery man was but Cecily lets Luke believe that she doesn’t know.  Although Cecily begins the story wounded and alone she transforms into a stronger woman.  She realizes that she is not going to sit back and lose Luke again.  Their story was so sweet my heart ached for them.  Both Luke and Cecily were incredibly sweet and loving characters.  The secondary characters were also fun.  Instances like these it would be better for the story to be longer because there was a lot more that could have been added.  But this was my favorite story and I really enjoyed it.

One Starlit Night, by Carolyn Jewel
Three stars
This story was really intense.  Portia and Lord Northword were a very interesting couple.  They grew up together and were each other’s first love.  Through a series of events Northwood ends up married and eventually widowed.  Portia never married but is feeling the pressure from her sister-in-law to make a match and find her own home.  Portia carries a big secret and wound inside of her.  I really liked her and felt bad for her situation.  Lord Northword was also an enjoyable character but he was harder to understand.  Although Portia forgave him, I had a harder time feeling compassion for him.  Eventually realizing that she and Northword were not meant to be Portia begins to contemplate a marriage to another person. Do Portia and Northword eventually get their happily-ever-after?  It was an interesting ending.
Claiming the Duchess, by Sherry Thomas
Sherry Thomas is one of my favorite authors.  I really enjoy her work and “Claiming the Duchess” was no exception.  This was a very short story, probably the shortest of the collection but it did not make it less enjoyable.   When the story begins Clarissa is married to a man that does not make her happy.  The only comfort she has is her stepson, whom she adores.  She meets Mr. James Kingston at an event and feels a strong attraction to him.  But because she is married she does not act on her feelings.  Four years later she is a widow and is hosting a gathering at her house.  She invites James under the excuse that someone else wants him there.  During the years of her marriage she developed a friendship via letters with a Miss Julia Kirkland.  During this gathering she will finally meet her friend.  When Clarissa and James meet again their feelings have not changed and now there is nothing standing in their way.  This was a great read and the characters had great chemistry.
The Misbehaving Marquess, by Leigh LaValle
Three Stars
Catherine Raybourne, the Marchioness of Foster, was abandoned by her husband a short time after getting married.  Through a series of misunderstandings Jaime, her husband believes that she had an affair.  Jaime is devastated because Catherine has always been the love of his life.  He leaves her and goes off to travel the world, never once sending even a letter.  Catherine realizes that she made a mistake when she is caught in an unflattering situation but she is never given the chance to explain what really happened to Jaime.  When his family is left without an heir, he has to return home and tell his wife that they need an heir.  Catherine is ready to end their marriage and has an annulment drawn up.  Overall this was a sweet story but the misunderstanding seemed a little week.  I enjoyed the story and liked the main characters but found some holes in the excuse that Jaime gave for leaving.

Ruined by a Rake, by Erin Knightley
Eleanor Abbington is happily a spinster.  She is content with her life and more than happy on the shelf.  When her uncle has other plans for her she is desperate for a solution.  Nicolas Norton is back home and ready to see Eleanor.  They grew up together and were tomboys and the best of friends.  Throughout the years they have never seen each other as a boy and a girl but when Nick learns that Eleanor is going to be married he quickly realizes that he is not ready to lose her to another man.   Nick and Eleanor were really sweet, my only complaint is that they didn’t have as much chemistry as I would have liked.  But overall it was an enjoyable story.
These stories were all very sweet.  Most of the hero’s and heroines grew up together and realized that their feelings changed.  One of my favorite aspects of this collection is the diverse authors.  All of them have a very unique way to tell a love story and all were very individual.  This was a fun read. 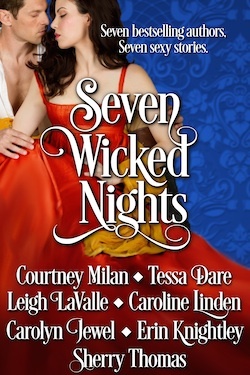