Bring On the Heat The Boys of Summer # 1 By: Katie Rose Plus Give Away


Bring On the Heat
The Boys of Summer # 1
By: Katie Rose
Releasing August 26th, 2014
Loveswept

Blurb
In Katie Rose’s irresistible battle of wits, a case of mistaken identity lands a female fan in bed with a sexy superstar—and in major-league trouble.

House-sitting for a rich and famous friend has its perks, and Darcy Hamel isn’t shy about enjoying them. Especially when it means scoring a ticket to an exclusive fashion show hosted by the New Jersey Sonics. An avid baseball fan, Darcy has always dreamed of meeting the team—especially the starting pitcher whose body is as hot as his fastball. But there’s a catch. The gala is by invitation only. To get behind the velvet rope, mild-mannered Darcy will have to pose as party girl Lydia Logan.

Schmoozing is one of the downsides of fame, but Chase Westbrook knows how to liven up even the dullest event. And nothing spices a night up more than a beautiful socialite with a naughty reputation. What Chase doesn’t expect is a hint of sweetness beneath her sultry façade. Flirtation turns to seduction and leaves him aching for more. Chase just doesn’t know who the real Lydia is: the spoiled tease crying foul over some missing diamonds or the alluring woman making a play for his heart.

Author Info
Award-winning historical author Katie Rose makes her contemporary debut with the Boys of Summer novels, Bring on the Heat and Too Hot to Handle, which combine Katie’s true loves: baseball and romance! When not watching baseball, Katie is at her lake house in New Jersey, hard at work on her next book.
Author Links
Website: http://www.colleenquinn.net/katierose.php
Facebook: https://www.facebook.com/historicalromanceauthor
Twitter: https://twitter.com/AuthorCQuinn
Goodreads: https://www.goodreads.com/author/show/399542.Katie_Rose

Rafflecopter Giveaway ($25 eGiftcard to Book Retailer of Choice, Loveswept Mug and Tote)
Link to Rafflecopter Page:        Give Away


SO WHAT MAKES A HERO HOT?

So here comes the fun topic. When thinking about a baseball hero, what separates the hotties from the not so much?
So we can start with type. A lot of women lean toward the alpha male, all tall dark and handsome and pumped with testosterone. You can find a lot of them in baseball for sure, and even more in the NFL. But does that exclude their sexy blonde brethren, or even the gingers who might know a thing or two about love?
Fortunately, baseball offers something for every fantasy. How many St. Louis fans have garnered an appreciative eye in watching Matt Carpenter? Young, athletic and gorgeous, with penetrating dark eyes and a bat that won’t quit. Or maybe if pitching is more your speed, Cole Hamels with the Philadelphia Phillies really brings on the heat. Latino lovers may favor José Fernandez, who is almost as cute, and who can forget Matt Harvey and that underwear commercial?
So far they are all tall dark and handsome. But when thinking adorable, how could you overlook Chase Utley? With those burnished blonde curls, and little boy smile, Chase is a major league dream boy.
When I sat down to pen my first contemporary romance, being a baseball fan gave me loads of opportunities for heroes. For my first book of THE BOYS OF SUMMER series, Chase Westbrook was my hero. Chase is a pitcher for the fictitious New Jersey Sonics, and holds all of the qualifications of an athletic heartthrob. Yes, he’s tall, dark, and handsome, with black hair and blue eyes (my favorite combination). And oh, by the way, he is built. He has the lanky form, sinuous thighs, and impressive biceps of a major league pitcher.
And he’s intense. When Chase walks up to the plate, he has a strategy in mind, and a focus that is downright sexy. He is good at what he does, better than good. And in spite of his GQ looks, he is oblivious to anything except the matter at hand.
Not that he doesn’t have his flaws. Chase is young, and right now is following someone else’s dream. It takes him some time in BRING ON THE HEAT to become the man he was destined to be.
But he does have character. Chase takes care of his mother, has a tough relationship with his father, but is respectful. He is intrigued by our heroine Darcy, who he mistakes for socialite Lydia Logan. Like most athletes, Chase thinks he needs to be with the elite team, make a lot of money, and have a trophy girl on his arm. His world turns upside down when he realizes that the future he has been pursuing is all wrong for him.
Yes, Chase was great to dream about. He is funny, intense, sexy, and charming. How do you top that? But when I began book number two, TOO HOT TO HANDLE, Jake Baldwin gives him a pretty good run for the money. . .
So my question is: what is your type? Who are the baseball players you drool over? And what makes them special to you? 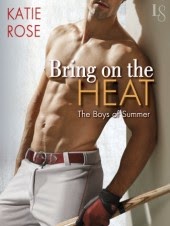