Trapped at the Altar (Paperback) by Jane Feather

Jane Feather is an accomplished author. That was one of the main reasons that I wanted to read this book. The other was the plot. I liked the idea of a heroine forced into a marriage and I was curious to see how the story would play itself out.

Ariadne “Ari” Carfax is a woman ahead of her time (another reason I wanted to read this story). Ari does as she pleases. She is very angry that she is forced into a marriage that was arranged by her grandfather when she was a child. The marriage was agreed upon to restore the family name in the eyes of the king. Ari is promised to be married to her childhood friend Ivor Chalfont. She and Ivor have known each other all their lives and they are best friends. So why is she not happy about the marriage? Ari is in love with Gabriel. Gabriel is a regular guy, a poet, but he’s not titled and they cannot marry.

So far the plot seemed to work…but… the heroine and the plot fell flat for me. I can honestly say that I made and effort to like this book and thought, until the last page, that I would come to a point where I enjoyed it.

What didn’t work? First Ari. She is a deviant character, which is good. However she was deviant for all the things that did not make sense. First she decides that even though she is promised to be married to her childhood best friend she decides that she will take Gabriel as her lover. She is determined to continue her relationship with him even after they are married. So this concept would have worked if it weren’t for their friendship. She and Ivor supposedly know each other in and out but she has no problem deceiving him. I would like to say that this was her only deception… but it’s not… After she begins to see Ivor in a different light and develop feelings for him she continues to lie to him about different things in their relationship. Although she is honest with him and tells him that she will only come to care for him as friend when she does develop feelings for him she lies and is deceitful.

Ok, so far I’m still holding on to the hope that the story will get better… The first half of the book is about Ivor and Ari’s life in a simple cottage in the country. During this time they are still trying to get to know each other as husband and wife. So, I got that but what I didn’t get was the awkwardness that they shared. Ivor asks, often, what kind of wife she will be. Shouldn’t he know? According to the plot, they know each other in and out… Ok, so the first part is about them as a newly married couple. Usually people fall in love after they get to know each other. That was not the case with Ivor and Ari. Although she knew him all her life she only begins to fall in love with him once they share in husband and wife activities.

So now that Ari feels guilty about enjoying her “relationship” with Ivor, she starts to feel guilty because of Gabriel. However, when they begin their trip to London and she discovers Gabriel will be there she continues to send him secret messages. It seems that Ari is only considered about her feelings, what she wants and she could care less about anyone else.

Besides the very frustrating heroine, I wanted more from Ivor. He was so sweet and understanding but there were times when I wanted him to really tell Ari off. I really did! He basically accepted all her deceitfulness and lies and even after they are confirmed (because he knows he cannot trust her) he just simply sends Gabriel away. He goes home and confesses him undying love to his wife. What??? I could not believe this!

The plot also fell short. The reason that Ivor and Ari were promised to each other in marriage was to establish the family name. Life at court was such a short part of the story. I thought that this fell flat. Also, her uncle. The author mentions what a tyrant he is and that he basically calls the shots but he also fell short. Even the end felt rushed. For the first half nothing happens and then when Ivor finds out Ari is corresponding with Gabriel there is no climax. I plan to read more books by Jane Feather, and hopefully I will enjoy them, but this one fell very short. 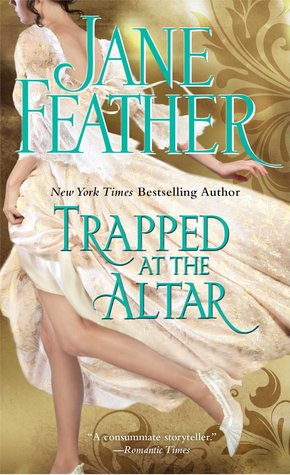