My Beautiful Enemy by Sherry Thomas

So, I’ve read Sherry Thomas before and really like her. Since I have such high expectations of her writing and story I might be a little harsh with three stars but I don’t think four stars would be right.

My Beautiful Enemy starts off with a big action scene. While I LOVE stories where there is action and the heroine is kicking butt it was too much. I had to re-read the scene because I kept thinking, what the heck is going on? Also, because the author jumps right into the story I couldn’t figure out who the characters where. I love when a story doesn’t take forever to get started but I think Ms. Thomas jumped the gun or in this story she jumped the knife.

After I pushed through the beginning I tried to sort out who the characters were or who they weren’t… Our heroine is Catherine. Catherine or Ying Ying is the illegitimate daughter of a Chinese courtesan and an English man. She grew up longing for acceptance and a place to belong. Her stepfather is a part of the high ranking society in China. Her stepfather sends her on a mission to England. Catherine was trained in different arts and is a type of warrior/ spy. When she is in England she meets her ex-lover-Captain Leighton Atwood. However, both are in disguise… Ying Ying (now Catherine) met Leighton before on a mission disguised as a boy. He sees through her disguise and they become involved.

Ok, so a lot is going on in this book. The story jumps around so much I felt like I needed to draw a graph and follow who the characters were and where they were. The story also jumps around from the past to the present, from China, India to England. I think this is a Thomas signature. She’s done this before in her other books (different countries and present and past) but in this book it all felt very chaotic… and I struggled to stay engaged and interested.

As the story unravels, we learn that Leighton and Catherine are on similar missions and that they share a common enemy although the enemy is pretty well hidden (I have to admit I did not guise who the “traitor” was. I personally think that the book would have worked better if Thomas dealt with the past first and then made her way to the present instead of mixing it up. Catherine and Leighton eventually work out their differences and clear up big misunderstandings that happened in their past. They had great chemistry and great adventures just a very chaotic storyline. Also, because there is so much going on I never really understood Leighton. I didn’t really get him as a character. I really liked Catherine and I think this book would have worked better if it was an adventure instead of a romance. Overall, I will continue to read Thomas and anyone that likes a book packed with adventure, mystery and travel will enjoy this book. 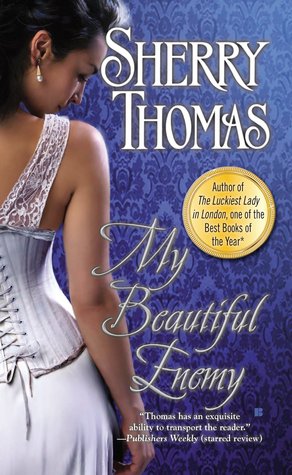