The Shocking Secret of a Guest at the Wedding Millworth Manor # 4 By: Victoria Alexander

The Shocking Secret of a Guest at the Wedding
Millworth Manor # 4
By: Victoria Alexander
Releasing November 4th, 2014
Zebra / Kensington 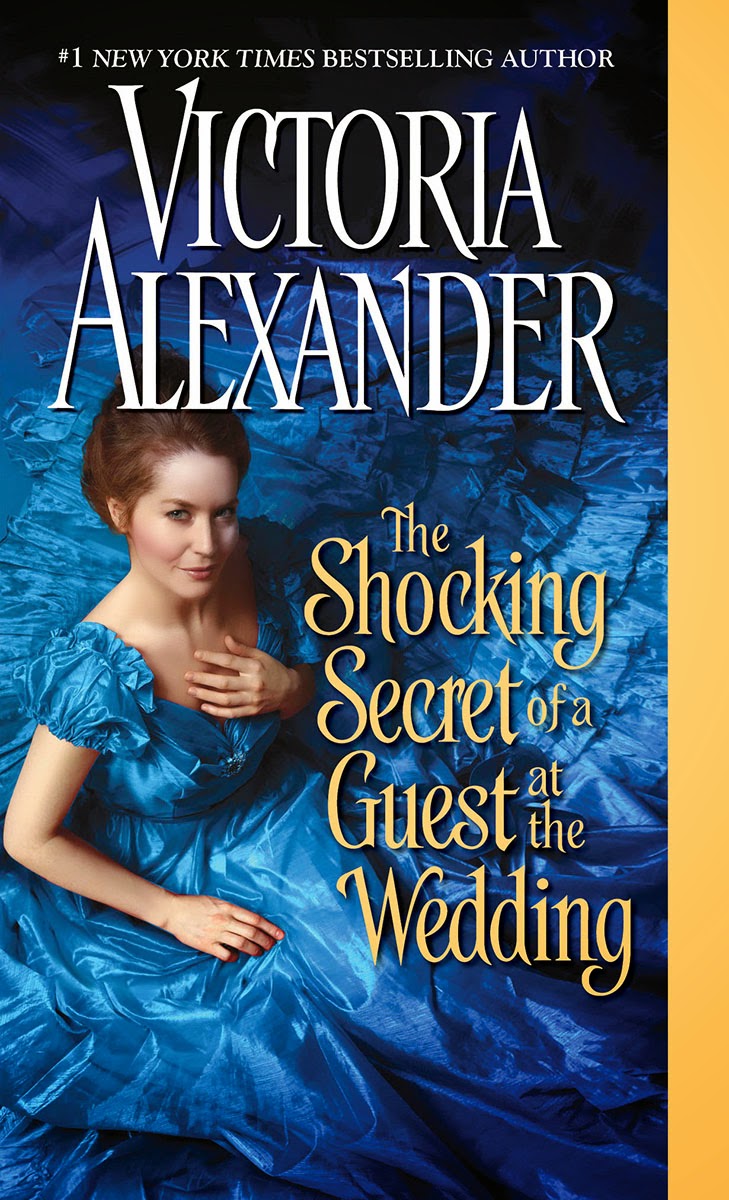 Introductions shall be followed by light conversation, dancing, flirtation, arguing, reconciliation, and an impulsive kiss that both parties are quite certain they will never repeat.

A mutually beneficial fake engagement will be accompanied by all manner of very real complications, scandalous revelations, nefarious schemes, and one inescapable conclusion: That true love—unlike the perfect wedding—is impossible to plan…

Author Info
New York Times bestselling author Victoria Alexander was an award-winning television reporter until she discovered fiction was much more fun than real life. She turned to writing full time and has never looked back. Victoria grew up traveling the country as an Air Force brat and is now settled in a very old house in Omaha, Nebraska, with her husband, two allegedly grown children and two bearded collies. She firmly believes housework is a four-letter word, there are no calories in anything eaten standing up, procrastination is an art form, and it's never too soon to panic.

Excerpt
“First, you should know about your family, Jackson,” Father began.
“He does know about his family,” Mother said under her breath.
Father ignored her and continued. “There are Channings all over England, mostly distant relations and you needn’t be overly concerned with them.”
“Although it is nice to know they exist,” Lucy said.
“Exactly.” Father nodded. “And I dare say you’ll meet them all eventually.”
“I really don’t see –“ Mother began.
“Quiet Mother.” Jack nodded at his father. “Go on.”
“For the most part, they’re not especially important although admittedly some of them are most amusing. Eccentric is probably the kindest description.” The colonel lowered his voice in a confidential manner. “There is Cousin Wilfred on my father’s side. He was quite convinced he could fly. He couldn’t of course. Pity, as it turned out.” Father shook his head in a regretful manner. “But as I was saying, you needn’t bother concerning yourself with anyone aside from the immediate family. At least for now.”
“The immediate family?” Jack said.
“You my boy, have an uncle, my twin brother, Nigel, and an aunt, his wife Bernadette. They have three daughters, charming girls all of them. They’ve grown up quite nicely, all things considered. Oddly enough, I am not the only brother whose wife preferred to let his offspring believe he was dead.”
Lucy stared.
“Although in Nigel’s case, he did rather deserve it. But that’s neither here nor there at the moment.” Father’s brow furrowed thoughtfully. “Let me thin. The eldest girls are older than you and are twins. One is married, the other a widow and about to be married again. The youngest, Delilah, is also a widow. So you can see how the revelation that I have a son changes, well, everything. Especially the future. The family’s and yours.”
“Basil.” A warning sounded in Mother’s voice. ‘This is not how I wanted –“
“It no longer matters what you want Elizabeth. You’ve had what you wanted for far too long.” Father cast her a hard look.
“I’m not certain I understand,” Jack said slowly. “I know I am as shocked by your existence as you are by mine. And this does change a lot, for any number of reasons. But while it certainly is significant, in a personal sense, I fail to see what effect my having a living father, and you having a son has on your future or mine. Not that I don’t like the idea mind you,” he added quickly. “It would be different if we were having this, oh, reunion I suppose is the only word for it, when I was ten years old or even twenty. Burt I am an adult. I have a position of responsibility at the bank and a sound, solid career ahead of me there. My future is well planned out.”
“Exactly,” Mother said under her breath.
“It might well have been planned out yesterday or this morning or even a few hours ago but now…” His father’s gaze me his. “Now your future is entirely different.”
Jack drew his brows together. “I still don’t see-“
“My brother is the Earl of Briston.” Father paused to allow the others to grasp the significance of his pronouncement.
“Jackson, your uncle is an earl,” Lucy said with delight. “How very interesting.”
“It’s more than merely interesting my dear girl,” Father said. “I know it’s not the same in your country-“
“We don’t have earls for one thing.” Mother sniffed.
“But in my country”-he met Jack’s gaze-“your country as well titles and property are often tied together in what is called an entailment. Are you familiar with it?”
“Vaguely.” Jack nodded. “We deal on occasion with English financial institutions and I’ve seen reference to it in correspondence. It has to do with inheritance doesn’t it?”
“Exactly.” His father studied him closely. “A title is tied to a family’s property, they are passed on together. In our case, Millworth Manor, the estate that has been in our family for generations, as well as some other properties, are tied to the title. The title can only be inherited by the closest male relative. If my brother died, I would be next in line to be the Earl of Briston. If I died..”
Lucy gasped.
Mother sighed.
Jack stared. “Are you saying that I would be the next earl?”
“That’s exactly what I’m saying.” Father nodded. “And thank God, too. We were all afraid Millworth and the title would eventually go to Wilfred’s son.” He shuddered. “And believe me no one wanted that.”