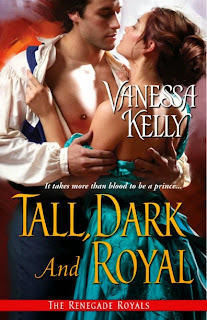 He's the man behind the mission to track down the illegitimate children of England's Royal Princes and help them get their due. But his deepest desire is far more personal… Magnificent and stubborn.

Fourteen years apart had not changed Chloe Steele, or Dominic Hunter's love for her. He'd been a street urchin, a boy raised at court, and finally a magistrate, yet he'd never belonged anywhere--except by her side. Now Chloe devoted herself to girls threatened by scandal--like she had been. But she was in danger, and Dominic was determined to help--and hopefully make up for lost time…

Even in childhood, Dominic had made Chloe feel safe. Now she also felt thrillingly flustered by the powerful man he'd become, and by the longing he inspired. Because Dominic meant not only to protect her, but to untangle the lies that had separated them. Yet for Chloe, surrendering to temptation may be easier than risking a future that could ruin them both… 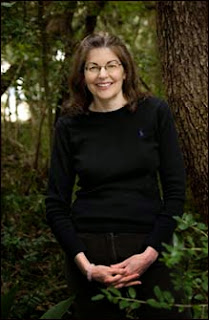 Vanessa Kelly is an award-winning author who was named by Booklist, the review journal of the American Library Association, as one of the “New Stars of Historical Romance.” Her Regency-set historical romances have been nominated for awards in a number of contests, and her second book, Sex and The Single Earl, won the prestigious Maggie Medallion for Best Historical Romance. Her current series, The Renegade Royals is a national bestseller. Vanessa also writes USA Today bestselling contemporary romance with her husband, under the pen name of VK Sykes.

Rafflecopter Giveaway ( $20 Amazon or B&N Gift card and TWO sets of the first two books in the series (Secrets for Seducing a Royal Bodyguard, Confessions of a Royal Bridegroom) )
a Rafflecopter giveaway

Excerpt
Dominic strode through but came to a sudden halt, his heart jolting at the sight of Chloe reclining on a chaise with a bandage wrapped around her head. Justine Steele, Dominic’s godchild, sat next to her holding a teacup. Lounging in a nearby armchair was Griffin Steele, Chloe’s son and Justine’s husband.
“What the hell is going on here?” Dominic snapped. He glared at Griffin, who had a knack for finding or, indeed, creating trouble. “How did your mother get hurt?”
Griffin let out a dramatic sigh as he came to his feet. “You have a lamentable tendency to blame me for everything, Dominic. I had nothing to do with Mother’s, er, little accident.”
Chloe threw aside her lap robe and stood. “Dominic, I’m fine. There’s nothing for you to worry about.”
But when she wobbled, Justine had to make a grab for her. In an instant, Dominic was by Chloe’s side. “For God’s sake, sit down.” He gently lowered her back to the chaise.
Her tall, slender body felt fragile in his hands, as if the merest touch could break her. But appearances were deceptive. For all her pale, delicate beauty, Chloe had a strong will and character that had withstood years of tribulation.
“You know the doctor told you to stay off your feet and rest,” Justine affectionately scolded.
“I’m not sure how she’s supposed to rest with you lot fussing over her,” Griffin said. “Hill has been popping in and out like a character from a farce, not to mention all the girls sneaking in. It’s a bloody circus.”
Justine frowned at her husband. “They’re worried about Chloe.”
Dominic throttled back his impulse to snap. “I would be most grateful if someone—anyone—would answer my question. Wait,” he said to Justine. “First, tell me what the physician said.”
“Perhaps you might try asking Chloe, Sir Dominic,” Chloe said with pointed courtesy. “As you can see, she is perfectly capable of speech.”
Dominic mentally winced. Chloe only used his title when annoyed with him. “I’m sorry, my dear. But it was a shock to come upon you looking like you’d been set upon by thieves.”
Thankfully, she flashed him a wry, forgiving smile. “Apology accepted.” She shifted her legs and patted the seat of the chaise. “Sit down and let Justine get you a cup of tea while I’ll tell you all about it. Not that I wanted you to drag you into this ridiculous and unfortunate episode, but my son insisted. Who knew Griffin could fuss and worry as much as any old maid?”
Her son—one of the most ruthless and powerful men in London—rolled his eyes but declined to defend himself.
“What happened to your head?” Dominic eyed the bandage wrapped around her brow.
“I bumped it, that’s all,” Chloe replied. “The doctor insisted I wear this silly thing and my son won’t let me take it off.”
Griffin narrowed his dark gaze on his mother. “You didn’t bump your head. It was bumped for you when that bloody bastard shoved you into the wall. And you will keep that bandage on for as long as is required.”
Dominic had been reaching to accept a cup from Justine, but his hand froze in mid-air. Slowly, he turned to Chloe. “Someone shoved you?”
Chloe’s shoulders unconsciously hiked up a notch. “Yes, but it wasn’t a very hard shove. Truly, I’m fine.”
Dominic could hear Griffin grinding his teeth from several feet away. He sympathized, but the situation was confusing enough without him losing his temper, at least not until he’d apprised himself of the facts.
But once he tracked down the man who had dared to touch Chloe, the bastard would rue the day he was born.