John Chase Regency Mystery Series by S.K. Rizzolo Plus Give Away 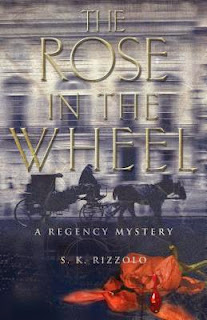 Please join S.K. Rizzolo as she tours the blogosphere for the John Chase Regency Mystery Series Book Blast, from November 3-16, and be entered to win all three books in the trilogy!
The Rose in the Wheel (Book One)

Regency London knows Constance Tyrone as the conspicuously celibate founder of the St. Catherine Society, dedicated to helping poor women. One wet November evening a carriage mows down Constance outside her office. Curiously, while her corpse’s one foot is bare, the other is shod in a clean satin slipper despite the muddy road. Why was a gentlewoman abroad in the night? And if she died under the wheel, whose hands bruised her neck and stole her monogrammed crucifix?

As horrifying murders on the Ratcliffe Highway claim all London’s attention, the trio discovers that it won’t be easy to unravel the enigma of Constance Tyrone, a woman who revives the legend of martyred St. Catherine.
Blood for Blood (Book Two)

In the spring of 1812, the Luddites are on the march, Lord Byron is taking London drawing rooms by storm, and Penelope Wolfe has become a lady’s companion. When one of the footmen turns up dead with a knife to the heart, Penelope and Bow Street Runner John Chase are entangled in a web of family secrets and political conspiracy that stretches far beyond luxurious St. James’s Square.

With the help of barrister Edward Buckler, Chase follows the trail of a mysterious mad woman caught peeping in the window at the corpse. Penelope struggles to fit into the fashionable world, encountering people who hide resentment and deceit under smooth smiles.

Set against a backdrop of millennial fervor with thousands awaiting the end of the world, BLOOD FOR BLOOD explores the simple truth that every drop of blood spilled will be avenged.
Die I Will Not (Book Three) 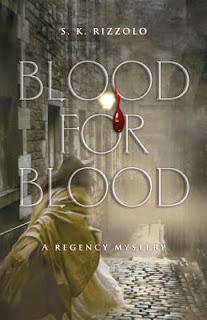 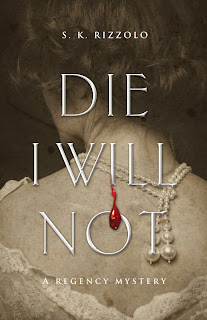 Unhappy wife and young mother Penelope Wolfe fears scandal for her family and worse. A Tory newspaper editor has been stabbed while writing a reply to the latest round of letters penned by a firebrand calling himself Collatinus. Twenty years before, her father, the radical Eustace Sandford, wrote as Collatinus before he fled London just ahead of accusations of treason and murder. A mysterious beauty closely connected to Sandford and known only as N.D. had been brutally slain, her killer never punished. The seditious new Collatinus letters that attack the Prince Regent in the press also seek to avenge N.D.’s death and unmask her murderer. What did the journalist know that provoked his death?

Her artist husband Jeremy is no reliable ally, so Penelope turns anew to lawyer Edward Buckler and Bow Street Runner John Chase. As she battles public notoriety, Buckler and Chase put their careers at risk to stand behind her while pursuing various lines of inquiry aimed at N.D.’s murderer, a missing memoir, Royal scandal, and the dead editor’s missing wife. As they navigate the dark underbelly of Regency London among a cast driven by dirty politics and dark passions, as well as by decency and a desire for justice, past secrets and present criminals are exposed, upending Penelope’s life and the lives of others.
Buy the Books 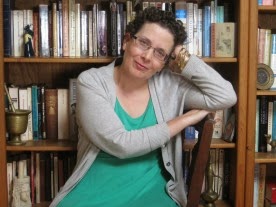 S.K. Rizzolo is a longtime Anglophile and history enthusiast. Set in Regency England, The Rose in the Wheel and Blood for Blood are the first two novels in her series about a Bow Street Runner, an unconventional lady, and a melancholic barrister. An English teacher, Rizzolo has earned an M.A. in literature and lives in Los Angeles with her husband and daughter.

Friday, November 7
Passages to the Past
Caroline Wilson Writes

Monday, November 10
Layered Pages
With Her Nose Stuck in a Book

Tuesday, November 11
To Read or Not to Read

Friday, November 14
Peeking Between the Pages 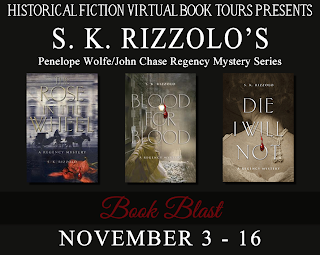