Crazy is Normal by Lloyd Lofthouse


My Review:
Five Stars
Copy received for an honest review
Loved "Crazy is Normal" by Lloyd Lofthouse.  First, I have to confess that since I'm a teacher I found his personal experiences very relateable.   His humor made reading this book so enjoyable and most of the book felt like a conversation.  Lofthouse really knows how to explain the plight that teachers face in the classroom.  He doesn't try to be the hero but is very straightforward and honest, which I loved!  This is a great read for anyone. Anyone that "thinks" they understand the education system, or "thinks" that they know what life is like in the classroom.  Lofthouse was brutally honest and very right about some things that sabotage student success.

"Readers who envision eager students lapping up learning led by a Tiger Teacher will be disappointed. Lofthouse presents us with grungy classrooms, kids who don't want to be in school, and the consequences of growing up in a hardscrabble world. While some parents support his efforts, many sabotage them-and isolated administrators make the work of Lofthouse and his peers even more difficult.

Throughout this memoir, though, Lofthouse seems able to keep the hope alive that there's a future for each student that doesn't include jail-thanks in large part to his sixth period journalism class and its incredible editor, Amanda." - Bruce Reeves

Praise for 'Crazy is Normal':

What works most effectively is how Lloyd shows the contrast between the two student extremes - the top achievers who take what Lloyd offers and learns how to conquer the world, and the many slackers who appear determine to sabotage their teacher's best efforts to teach them the skills they need for a successful future."-Tim M, Amazon Reviewer

"Lots of teachers I know wish they had kept a daily journal as detailed as Lofthouse's; you forget so much. He's done old teachers a favor, and will have them nodding their heads - "yes, that's the way it was." Parents and teachers who live in lusher locations may turn their nose up at his toughness and military approach to classroom rules, but in the long run it's the students who profited. Someday maybe someone will keep a similar journal and write a parallel account of life in a "nice" school classroom. A great read that gradually moves the reader from a sense of "crazy" to a sense of "maybe there's hope."-Unhirsute, Amazon Reviewer

"Lloyd Lofthouse has written a powerful memoir in Crazy Normal that took me back to time we shared at Nogales High School. His reflections and anecdotes based on his daily journal brought so many memories of my own teaching experiences there. This is not fiction, but retelling of events that might give insight for many into the challenges a teacher faces every day.


Lofthouse's journal shows a later picture of the community. The kids who populate the pages of his memoir don't have dirt floors, but many of them are still new to the country and the language. Some are headed to colleges and universities while others, if they graduate from high school, might be the first of their families to achieve that diploma.


I had to take breaks from reading when Lloyd described the grueling and frustrating teachers' meetings. These were not times I wanted to revisit now that I have retired after thirty-seven years of teaching. But like Lloyd, my good memories are of the students who walked through my doors every day. I revel in their accomplishments and their ability to overcome huge societal obstacles in order to succeed. Nogales is a place like many other American high schools where crazy is normal.

I applaud Lloyd Lofthouse for his dedication and hard work on behalf of kids who needed someone who cared enough to help his students learn and grow. His story is worth telling-and worth the read."- GailtheReader, Amazon Reviewer 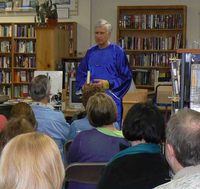 Little did Lloyd Lofthouse know in 1999, when he married Anchee Min, that he was beginning a journey of discovery. His first trip to The Middle Kingdom was on the honeymoon with his bride, who introduced him to China and Robert Hart (1835-1911), the main characters in Lloyd's first two novels,My Splendid Concubine and Our Hart. The next decade was a journey of discovery. Lloyd now lives near San Francisco with his wife-with a second home in Shanghai, China.

Lloyd earned a BA in journalism in 1973 after fighting in Vietnam as a U.S. Marine. While working days as an English teacher, he enjoyed a second job as a maitre d' in a multimillion-dollar nightclub. His short story, A Night at the 'Well of Purity' was named as a finalist for the 2007 Chicago Literary Awards.

Lloyd has won 15 awards for My Splendid Concubine and 5 awards for Running With the Enemy.