*ARC received for an honest opinion.
*Review originally posted at:  http://ramblingsfromthischick.blogspot.com
Usually I don’t read too many paranormal stories because I find that I have a difficult time identifying with the characters. I was really intrigued by this story because of the backstory of Jack the Ripper. Even though it’s a horrid historical occurrence the mysterious identity of who he was continues to intrigue. There are many different aspects of this story that are engaging. I was also interested to learn about Piper Smith and Sergeant Samuel Hawkins.

The story begins with the murder of a woman of the night. Immediately we are told that it’s Jack the Ripper who is responsible because he leaves a note. This is a dark story and there are some difficult scenes to read. I struggled at first to understand the main characters and there were so many layers behind these characters that they provided as much of a mystery as Jack the Ripper. There are a lot of characters and they all play a very interesting role. I enjoyed that all the characters were relevant to the story and interesting. It became like putting the pieces of a puzzle together. Piper Smith and Sergeant Samuel Hawkins bring many interesting aspects to the story in both the present and in the past. At first we know that Piper and Samuel grew up together but Samuel “abandons” Piper. This is a big issue between them and even though they share a very strong history in the present day they are practically strangers. Piper is trying to prove herself as an archivist. She has a machine that grabs the memories of the murder women. As an archivists the memories become hers. Since they can be a very scary to hold on to all those memories, Piper goes through a memory erasing exercise. Some memories she still wants to keep. Although Piper and Samuel share an intense history there is always friction between them. They are on opposite sides. Samuel, once a part of the Archivists' Guild with Piper, left with no explanation. Samuel is now a Sergeant at the King’s Sentry. This conflict becomes a major part of the story as it unravels. The feelings that Samuel has for Piper are evident but he keeps resisting them and trying to protect her. Samuel is your typical tortured, handsome alpha male.

This story is really a mixture of everything: science fiction, murder mystery and romance. It really has a little of everything but it mixes well. Sci-Fi readers will easily love this story since there are so many wonderful scenes (and gadgets) filled with imagination. Overall, I enjoyed the story, even though there were parts that I struggled through. Piper and Samuel made the story a great read for me, I wanted them to come to terms with their past and gain perspective on their future. I also really loved how Piper evolved from a shy and fragile young girl to a strong and in control woman. As Samuel and Piper are forced to work together they have to learn to trust. But the question becomes who they can trust. From the first memory extraction, Piper discovers clues that the murder might be an Archivist. She follows her instinct and keeps the information from her mentor Master Ryerson. Master Ryerson and Samuel definitely don’t like each other, and the reasons become evident. This was a very intense and intriguing read. This was my first read by Christina d’Abo but I look forward to reading more especially the next addition to The Shadow Guild. 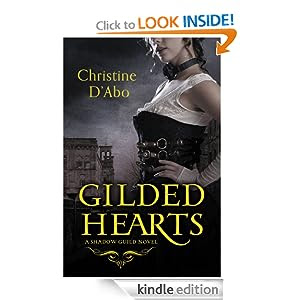