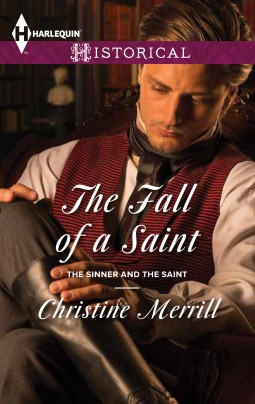 “The Fall of the Saint” as my first read by Christine Merrill. I wasn’t sure what to expect but I was intrigued by the plot. The good guy taken down by a governess.

Michael Poole, Duke of St. Aldric, is known as “the Saint.” Since this is the second book of the “Sinner and the saint” series the book picks up where, I assume, the first book left off. Michael shared a night with Madeline Cranston and she is pregnant. Michael was sick and thought he was sterile. Because having an heir is so important to him he goes on a rampage and begins to sleep around with different woman. He mistakenly goes into Madeline’s room and they share a moment together.

Madeline is in love with Richard. He goes off to war and she believes him dead. Although she thinks he is dead she still has hope that he will return for her. While she is staying at an inn she has an interview for a governess position, that is when she meets Michael.

Michael was too drunk to realize what happened but once he finds out that Madeline is pregnant he wants to marry her. His half- brother, Dr. Samuel Hastings was an illegitimate son and he doesn’t want to follow in his father’s footsteps. Even though he doesn’t know Madeline he wants to honor what he has done. Madeline doesn’t have too many options so she accepts his proposal.

Honestly, I disliked both these characters and the plot. Michael is anything but saintly. In the previous book he loses his fiancée Evelyn to his illegitimate brother and gets the mumps. It all becomes too much for him so he starts a life of debauchery. Madeline was really a jerk also. I disliked her immensely. First, she is so manipulative. She leads Michael to believe that something occurred the night that they were together that did not actually occur. She then acts disgusted with Michael. She tries to belittle every gesture he makes in order to develop some type of relationship with her. She makes it seem like she is frightened of him until one night she can’t control herself and seeks him out. THEN Michael begins to develop feelings for Madeline when Richard comes back. In his genius he invites Richard to stay at his house AND puts him in the room next to his wife because he knows that she is in love with him. My goodness… I seriously wanted to strangle these two because they were so ridiculous. So why three stars? Because I was intrigued with these two characters and I wanted to see how their story would play out despite how infuriating they were. This was definitely a unique story.
- October 19, 2014