Dare to Submit by Carly Phillips

Four Stars
Wow! I’ve read Carly Phillips before but “Dare to Submit” From the “Dare” series was way more than I expected!

Decklan Dare is part of the Dare family. He is a cousin of the Dare brothers and lives in New York. He is as a New York City detective. As a person he is very intense and also very shut down. He refuses to do relationships. Because Decklan lost his family at a very young age he is use to taking care of himself and he likes to feel in control. In order to fulfill his need for control he visits a fantasy club. At this club he first sees Amanda Collins.

Amanda is also very shut off. She also does not do relationships and she too frequents this fantasy club. Although she knows that Decklan has being eyeing her since her first laid eyes on her he has never approached her. Amanda is also pretty intense. She lives in California but gives herself some release at this fantasy club as well.

When Amanda and Deck finally decide to give into their mutual temptation, they both agree that their relationship will be purely physical. They both decide that they will enjoy their time together as long as it lasts and that is it. As tends to be the case neither one can deny the feelings that they develop for each other. By alternating weekends in NYC and California, they make sure to spend time together. Deck takes on the Dom persona and Amanda the submissive they both fall into an easy routine. When Deck’s family unexpectedly comes by and they meet Amanda they both realize that they have fallen in love with each other.

Amanda realizes that she has fallen in love with Deck and wants to tell him about a big secret that she has been keeping form him. Before she can tell Deck he finds out and he feels betrayed. I really liked Amanda and Deck and skipped the previous book in the series, Dare to Surrender because I was drawn to Amanda and Decks story. I thought that some aspects of the story were dark but it also made sense since both characters are intense. Their scenes together are also very intense. They really push each other’s limits in an attempt to learn to trust each other and communicate. The only reason this was not a five star for me was because of how Deck handled Amanda when he found out her big secret. I also wanted there to be a more emotional and stable connection between them. Overall, I’m enjoying all of Phillips books and plan to read “Dare to Surrender” next! This was a hot and steamy romance! 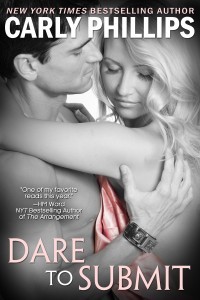