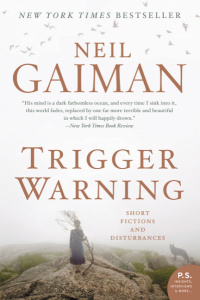 "We each have our little triggers . . . things that wait for us in the dark corridors of our lives." So says Neil Gaiman in his introduction to Trigger Warning, a remarkable compendium of twenty-five stories and poems that explore the transformative power of imagination.
In "Adventure Story"—a thematic companion to the #1 New York Times bestselling novel The Ocean at the End of the Lane—Gaiman ponders death and the ways in which people take their stories with them when they die. "A Calendar of Tales" is comprised of short pieces about the months of the year—stories of pirates and March winds, an igloo made of books, and a Mother's Day card that portends disturbances in the universe. Gaiman offers his own ingenious spin on Sherlock Holmes in his award-nominated mystery tale "The Case of Death and Honey." Also included is "Nothing O'Clock," a very special Doctor Who story that was written for the beloved series in 2013, as well as the never-before-published "Black Dog," a haunting new tale that revisits the world of American Gods as Shadow Moon stops in at a village pub on his way back to America.
Gaiman, a sophisticated writer whose creative genius is unparalleled, entrances with his literary alchemy and transports us deep into an undiscovered country where the fantastical becomes real and the everyday is incandescent. Replete with wonder and terror, surprises and amusements, Trigger Warning is a treasury of literary delights that engage the mind, stir the heart, and shake the soul.

My review:
Three Stars
Copy received from TLC Book Tours for an honest review
Neil Gaiman has been on my "to-read" list for a long time and I was so excited to have the opportunity to read his work.  First, I have to say that his writing is very engaging and his stories flow.  I also really liked that Gaiman's collection has a little bit of everything. He combines horror, fantasy, and humor.  I personally don't like horror and it scares me, I know I'm a big scary cat, but its true.  Aside from the horror stories, which were good,even though they scared me, I found his other short stories to be very engaging and I appreciated the fantasies that he was able to create.

Overall, I think you can't go wrong with this collection because fans will love his diverse collection and new readers of Gaiman, like me, will receive a great introduction to his talent and his varied style of story telling.  Aside from the horror - I guess these would be my trigger warnings- I found all the stories and pieces to be entertaining and enjoyable. 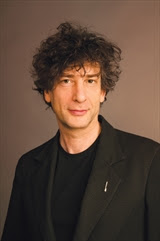 Neil Gaiman is the #1 New York Times bestselling author of more than twenty books, and is the recipient of numerous literary honors. Originally from England, he now lives in America.

Find out more about Neil at his website, find all his books at his online bookstore, and follow him on Facebook, tumblr, and his blog.
- November 16, 2015