To Catch a Falling Star Blog Tour by Anna Belfrage

Please join Anna Belfrage as she tours the blogosphere for To Catch a Falling Star Blog Tour, from April 7-May 8. 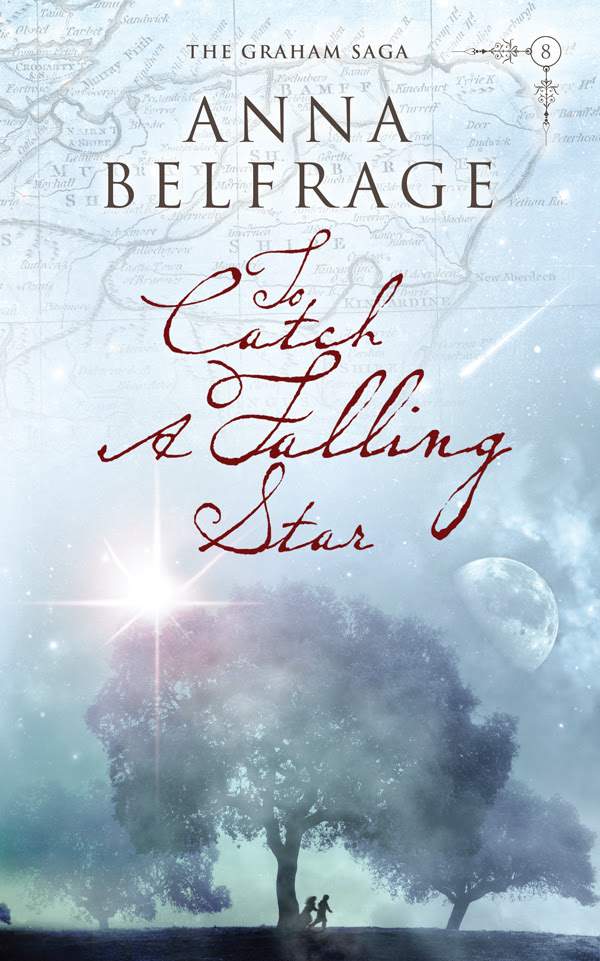 To Catch a Falling Star is the eighth book in Anna Belfrage’s series featuring time traveller Alexandra Lind and her seventeenth century husband, Matthew Graham.
Some gifts are double-edged swords …
For Matthew Graham, being given the gift of his former Scottish manor is a dream come true. For his wife, Alex, this gift will force her to undertake a perilous sea journey, leaving most of their extensive family in the Colony of Maryland. Alex is torn apart by this, but staying behind while her husband travels to Scotland is no option.
Scotland in 1688 is a divided country, torn between the papist Stuart king and the foreign but Protestant William of Orange. In the Lowlands, popular opinion is with Dutch William, and Matthew’s reluctance to openly support him does not endear him to his former friends and neighbours.
While Matthew struggles to come to terms with the fact that Scotland of 1688 bears little resemblance to his lovingly conserved memories, Alex is forced to confront unresolved issues from her past, including her overly curious brother-in-law, Luke Graham. And then there’s the further complication of the dashing, flamboyant Viscount Dundee, a man who knocks Alex completely off her feet.
All the turmoil that accompanies their return to Scotland pales into insignificance when a letter arrives, detailing the calamities threatening their youngest daughter in Maryland – at the hand of that most obnoxious minister, Richard Campbell. Matthew and Alex have no choice but to hasten back, no matter the heartache this causes.
Will they make it back in time? And what will Richard Campbell do?


My Review:
Five stars
Copy received from Historical Fiction Virtual Book Tours for an honest opinion
"To Catch a Falling Star" by Anna Belgrade is the last in "The Graham Saga" series.  So the sad news is that this is the end to the series, the good news is one for people like me that read only the last three books, we can go back and reunite with the Grahams.  Slowly I am collecting the books in the series and am only missing three.  There are eight books in total.  For those that have read the series since it's beginning, although it is the end it was a very satisfying end and I really think the author did the series and the characters justice.

First, the time period is incredibly rich!  Although Alex and Matt live in Maryland, when Mat receives a letter from his brother, Luke. Luke is not the nicest of persons so both Matt and Alex are a little worried about receiving his letter.  When they travel to Scotland to reunite with Luke they find that Scotland is in the mist of the Catholic and Protestant fights. The time period  was interesting to read about. It was also interesting to see how Alex and Matt dealt with the differences from Maryland.  I thoroughly enjoyed all the books in the series and highly recommend to anyone.

Buy To Catch a Falling Star

Book One: A Rip in the Veil
Book Two: Like Chaff in the Wind
Book Three: The Prodigal Son
Book Four: A Newfound Land
Book Five: Serpents in the Garden
Book Six: Revenge & Retribution
Book Seven: Whither Thou Goest
Book Eight: To Catch a Falling Star

I was raised abroad, on a pungent mix of Latin American culture, English history and Swedish traditions. As a result I’m multilingual and most of my reading is historical – both non-fiction and fiction.
I was always going to be a writer – or a historian, preferably both. Instead I ended up with a degree in Business and Finance, with very little time to spare for my most favourite pursuit. Still, one does as one must, and in between juggling a challenging career I raised my four children on a potent combination of invented stories, historical debates and masses of good food and homemade cakes. They seem to thrive … Nowadays I spend most of my spare time at my writing desk. The children are half grown, the house is at times eerily silent and I slip away into my imaginary world, with my imaginary characters. Every now and then the one and only man in my life pops his head in to ensure I’m still there. I like that – just as I like how he makes me laugh so often I’ll probably live to well over a hundred.
I was always going to be a writer. Now I am – I have achieved my dream.
For more information, please visit Anna Belfrage’s website and blog. You can also find her on Facebook,Twitter, and Goodreads.