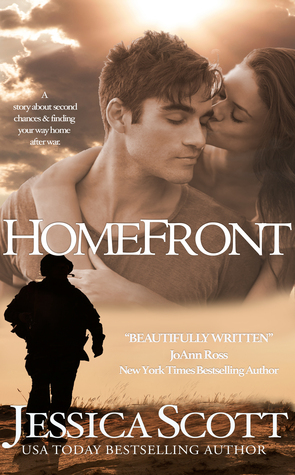 Five Stars
original review: ramblingsfromthischick.blogspot.com
I’m convinced Jessica Scott can do no wrong. This book was A-MAZING. I’ve read a few of Scott’s books so I should know by now what to expect but she always has a new trick up her sleeve. She always breaks my heart even though by now I should see it coming. I can’t help but feel for these characters. I constantly have to put her stories down and just breathe! Just like the previous books, once I started reading I could not stop and I quickly grew to love this characters.

Let’s start with the hero. First Sergeant Gale Sorren was such a juxtaposition of emotions for me. I really disliked his past because he basically left his then wife, Melanie, all by herself to raise their daughter. I admired that he was dedicated to his career but I disliked how he rationalized everything in his head because of his upbringing and because he and Melanie were married too young and got pregnant to fast. His big redeeming quality was his raw honesty. I could not help but ache for him. He was very upfront with Melanie about his faults and he took full responsibility. He also was very humble and didn’t just barrage into Melanie and their daughter ,Jaime’s, life. Just like the heroes in her other books Scott does not sugarcoat the effects of war and like her other characters, Gale is dealing with PTSD (Post-Traumatic Stress Disorder).

Melanie, Gale’s ex-wife, was also fantastic. She was a mom trying very hard to help her daughter Jaime not only grow as a teenager but also battle her own personal demons. Melanie has held it together for the twelve years since she had Jaime. She has the basic mother and teenage daughter struggles. I thought that their relationship was very real and authentic. When Gale is back Melanie is obviously hesitant to believe in him and let him back into their lives. Although Melanie has had her hearth broken by Gale before she has never stopped loving him and he never stopped loving her. Scott had a lot of work to do with this story, not only did she have to bring a couple back together but also make them a family.

I really loved Gale and Melanie together and Scott didn’t make it one big fairytale. They both had to do a lot of believing and soul searching. I loved how she brought them together and I thought that they both had intense chemistry. I was happy to see characters from previous books show up here because it made it feel like a huge family. I have to admit I was super happy that both Gale and Melanie finally got their HEA but I was disappointed to see the story end. I am looking forward to the upcoming books in the series and can’t wait to see what she has in store for Captain Sarah and Captain Sea!
- April 22, 2015