Take a Chance on Me (Something New, #1) by Jennifer Dawson

booknerdloleotodoblogspot.com
*ARC received for an honest review
Available 2/4/2014
I thought the story had a strong start.  It was really interesting-a runaway bride walks into a bar and the bartender use to be an attorney.  I even liked the reasons that Maddie ran out on her wedding...but... The rest of the story fell flat... Her continuous need for independence became a little redundant.  I really liked the build up Mitch's character but  at times it became hard to figure him out... After first he wants to help Maddie then seduce her... Also, it seems very unbelievable that he would take a complete stranger to his home and all of the sudden become so infatuated with her.  Overall, it was ok. 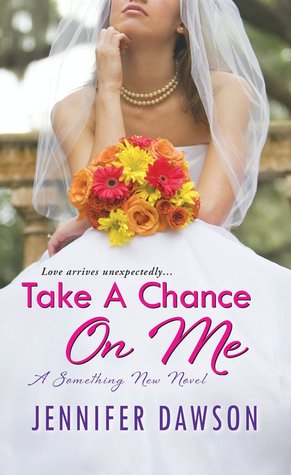