Review: Between the Devil and Desire by Lorraine Heath

Lorraine Heath is such a great writer and when I realized that I had not read this book yet, I jumped at the chance to read it. In classic Heath style I was captivated with the story and, although lengthy, finished it in two days. This is the second book in the “Scoundrels of St. James” series, I read the first one, In Bed with the Devil (Scoundrels of St. James, #1) and really enjoyed it. For anyone not familiar with the series, Jack, Lucian, Graves, Frannie, and Swindler were all street kids. It was Lucian’s grandfather that took them in the hopes of providing a better life for them. But they all have very different destinies and even though they share a past, they don’t share the same origins.

This is Jack Dodger’s story. I love Jack Dodger! He really carried this story for me and so did the mystery surrounding his beginnings. Jack has a gambling establishment that he created with the help of a mysterious benefactor. Jack was part of the street kids lead by Finnegan, he was the one that taught Jack how to survive and how to make sure that he never got caught while stealing. Jack is very rough around the edges and not part of the aristocracy. When he is named the guardian of the Duke of Lovingdon’s son. Jack is shocked because he never had a relationship with the duke and can’t understand why he would name him guardian. Even more shocked is Lovingdon’s widow- Olivia.

Olivia is angry and shocked when her husband’s will is read and even more when Jack Dodger is named the guardian. He has a terrible reputation and after a few conversations with him she is determined to take her son to the country and get away from Jack. Jack isn’t having it though; he is determined to figure out why the Duke names him of all people a guardian. Despite her constant objections and down-right arguments with Olivia, Jack is determined to be a good guardian to Jack. Not only did his mother sell him off when he was very young but he never knew his father. Jack informs Olivia that if she wants to get rid of him, all she has to do is remarry. Olivia is shocked at the suggestion, not only is she in mourning but she is also the epitome of social grace and respectability, she refuses to have her reputation stained.

Olivia and Jack were complete opposites. Their backgrounds could not have been more different. Although I liked Olivia I absolutely loved Jack. He was very emotionally disconnected but he was incredibly loyal to all those that he loved. His connection with Finnegan and his relationship with Henry-Olivia’s son were incredibly sweet. He was such a great hero! Definitely one of my favorites that I have read so far! Also, Heath has a talent for sneaking in very dark issues and making them a part of the story. Jack has some very dark secrets in his life and many of them still haunt him. I absolutely loved this story and plan to re-read it in the future. 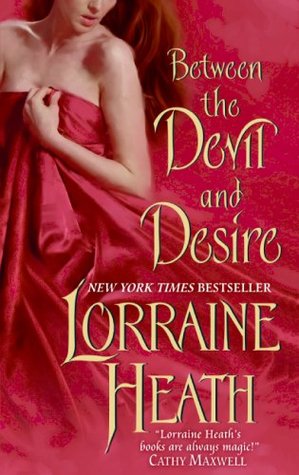