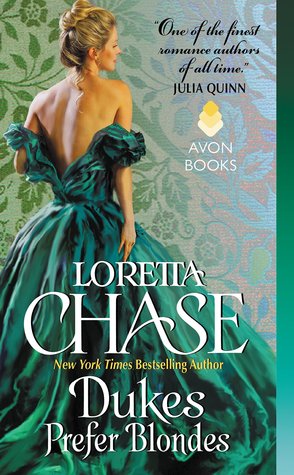 One of my all-time favorite historical romances was written by Loretta Chase, Lord of Scoundrels. I’ve read it countless times and never tire of it. Jessica and the Marquess of Dain are incomparable in my eyes. I absolutely loved them both and still after many years and readings, still love and am highly entertained by them. I’ve read other books by Chase and some have been a hit and others a miss.

When I saw “Dukes Prefer Blondes” I was intrigued because of the plot and the characters. Also, because it was written by Chase. This is the fourth in the “Dressmakers” series although I have not read the previous books. There were some elements of the story that I liked and some that either felt awkward or very drawn out for me. But overall this was an interesting read, even if not a fantastic one. Lady Clara Fairfax was a great heroine. I really enjoyed her. Even though she is beautiful and very highly sought after she wants more from her life than just to be someone’s wife. Clara wants to have a purpose and she is very highly committed to orphan and street children. Once she sets her mind to do something very little can dissuade her. But Clara has always been a free spirit and very independent, even as a young child. When is merely a girl she meets Oliver Radford. Radford is everything Clara is not. He is serious and a very determined and successful barrister. He was instantly impressed with Clara as a child and not much changes when he is reunited with her as an adult.

Clara seeks Oliver out to help her with a street child. She has given her word that she will help out a young boy and she searches for Oliver to help her. Oliver can’t be bothered because he doesn’t want to get involved and really doesn’t take Clara too seriously. Clara is determined to get the help she needs to fulfill her promise. Against his better judgement Oliver decides to help Clara but this leads to her becoming very sick with Typhus. He literally saves her life by nursing her back to health. Clara is very in love with Oliver but he considers himself beneath her and tries to not give into his feelings for her.

First, I loved Oliver and Clara together. I loved Clara as a heroine but I had a hard time with Oliver. I didn’t get him. He was awkward and hard to understand. I also felt that some of the scenes were awkward and the transition between scenes felt choppy and out of sync. Also, after Clara and Oliver are married I felt that the story dragged. I did however, love how their relationship continued to grow after they married. The adventure does not end when they marry and they go on many more investigations that Clara insists on being a part of. Characters from the previous books are mentioned and they give some insight into the series. Even though I did not love this book I still found it enjoyable and plan to read more books not only by this author but also in this series.
- March 01, 2016