Enter to Win a
Print Copy of FALL OF POPPIES 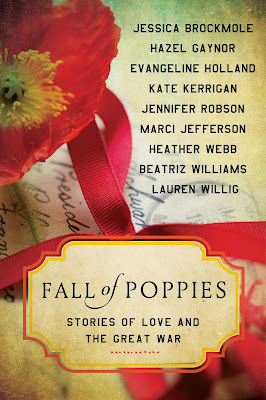 Top
voices in historical fiction deliver an intensely moving collection of short
stories about loss, longing, and hope in the aftermath of World War I—featuring
bestselling authors such as Hazel Gaynor, Jennifer Robson, Beatriz Williams,
and Lauren Willig and edited by Heather Webb.

A Belgian rebel hides from the
world, only to find herself nursing the enemy…

A young airman marries a stranger to
save her honor—and prays to survive long enough to love her…The peace treaty
signed on November 11, 1918, may herald the end of the Great War but for its
survivors, the smoke is only beginning to clear. Picking up the pieces of
shattered lives will take courage, resilience, and trust.

Within crumbled city walls and
scarred souls, war’s echoes linger. But when the fighting ceases, renewal
begins…and hope takes root in a fall of poppies.

Jessica Brockmole is the author of the internationally bestselling Letters
from Skye, an epistolary love story spanning an ocean and two wars. Named
one of Publisher’s Weekly’s Best Books of 2013, Letters
From Skye has been published in seventeen countries.

Hazel Gaynor is the New York Times and USA Today bestselling
author of The Girl Who Came Home and A Memory of
Violets. She writes regularly for the national press, magazines and
websites in Ireland and the UK.

Evangeline Holland is the founder and editor of
Edwardian Promenade, the number one blog for lovers of World War I, the Gilded
Age, and Belle Époque France with nearly forty thousand unique viewers a month.
In addition, she blogs at Modern Belles of History. Her fiction includes An
Ideal Duchess and its sequel, crafted in the tradition of Edith
Warton.

Marci Jefferson is the author of Girl on the Golden Coin: A Novel of
Frances Stuart, which Publisher’s Weekly called
“intoxicating.” Her second novel, The Enchantress of Paris, will
release in Spring 2015 from Thomas Dunne Books.

Kate Kerrigan is the New York Times bestselling author of The
Ellis Island trilogy. In addition she has written for the Irish Tatler,
a Dublin-based newspaper, as well as The Irish Mail and a RTE
radio show, Sunday Miscellany.

Jennifer Robson is the USA Today and international bestselling
author of Somewhere in France and After the War is Over. She holds
a doctorate in Modern History from the University of Oxford, where she was a
Commonwealth Scholar and SSHRC Doctoral Fellow. Jennifer lives in Toronto with
her husband and young children.

Heather Webb is an author, freelance editor, and blogger at award-winning
writing sites WriterUnboxed.com and RomanceUniversity.org. Heather is a member of
the Historical Novel Society and the Women’s Fiction Writers Association, and
she may also be found teaching craft-based courses at a local college

Beatriz Williams is the New York Times, USA Today, and
international bestselling author of The Secret Life of Violet
Grant and A Hundred Summers. A graduate of Stanford
University with an MBA from Columbia, Beatriz spent several years in New York
and London hiding her early attempts at fiction, first on company laptops as a
corporate and communications strategy consultant, and then as an at-home
producer of small persons. She now lives with her husband and four children
near the Connecticut shore, where she divides her time between writing and
laundry. William Morrow will publish her forthcoming hardcover, A
Certain Age, in the summer of 2016.

Lauren Willig is the New York Times bestselling author of
eleven works of historical fiction. Her books have been translated into over a
dozen languages, awarded the RITA, Booksellers Best and Golden Leaf awards, and
chosen for the American Library Association’s annual list of the best genre
fiction. She lives in New York City, where she now writes full time.