ARC received for an honest review.
This was my first time reading Miranda Neville so I was not sure what to expect. I had some issues with the plot and the story. I found her writing to be engaging and it flowed. There were times that I really enjoyed the book and times I struggled with it. I made my peace with a three star rating.

So when the story begins, our hero, Damian, Earl of Windermere, is out partying with this friends celebrating his twenty-first birthday. In the mist of all this partying he gambles away his mother’s home which was a part of his inheritance. So right off we are starting off with a hero that is very questionable. The story continues as he has to tell his father the news but Damian eventually ends up gaining it back… So one way that he wins back his mother’s home was by marrying Lady Cynthia. Although Lady Cynthia is not a peer of the ton her uncle set up a nice inheritance for her making it very appealing for Damian.

Lady Cynthia is very simple. Her dresses are picked by her aunt and she is not a reigning beauty. Also, because she lives in the country she does not have polished manners of London society. These are traits that apparently bother Damien. He is not in the least bit interested in his new bride. Damien is such a snob and really a right down jerk to Lady Cynthia. After a short time married he goes off to serve in the Foreign Service, but not before making it clear to Lady Cynthia that she is to turn herself into the proper wife for a diplomat. I felt so horrible for Lady Cynthia… she went into the marriage knowing that it was not for love but it didn’t stop her from trying to be the best wife. All this takes place in the past… In the present, Lady Cynthia is a London society lady. She is beautiful, elegant and knows the proper manners for London society. She is no longer the young bride that she was a year ago. Damien returns to London from his assignment and finds Lady Cynthia at the theatre with his once friend now enemy- Julian Fortesque, the Duke of Denford, Julian is after Lady Cynthia but has really provided her only with the company that she lacked.

Ok, in the mist of all this Julian is said to have some priced paintings in his possession. Although Damien still bares a grudge against Damien for things that happened that fateful night he has a duty to the Foreign Office to uncover if he really has these paintings. This means that he has to start up an acquaintance again with him after their falling out and even after he believes that he is Cynthia’s lover. Julian was a fascinating character in this story, and I really enjoyed reading about him. So Damien is back and tries to make amends with his wife. He realizes that he treated her very poorly and is making amends for his past.

Some issues I had… One besides the incredibly irritating hero, the jumping around from past to present. It made the story choppy. First it’s the past then it’s the present then it’s the past… It was hard to figure out where we were. Also, a HUGE part of the drive of this story was miscommunication or lack of communication. There was a lack of communication with his wife/ new bride and a miscommunication with Julian. I don’t want to give away what that was since it also was a driving force in the storyline. If all these characters sat down and had a conversation much would have been resolved earlier. These miscommunication/lack of were a little irritating. Even after Lady Cynthia and Damian are living together again they have very poor communication skills. Lady Cynthia was fantastic. She was a great heroine and I really enjoyed her. Overall, I enjoyed this story. I would have liked there to be more of drive in the plot then the above mentioned. I do recommend this story and will read more by this author. 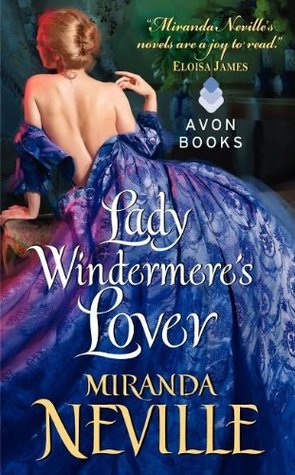