In Your Wildest Scottish Dreams The MacIain Trilogy #1 By: Karen Ranney 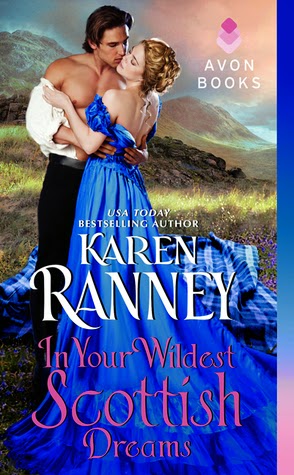 Seven years have passed since Glynis MacIain made the foolish mistake of declaring her love to Lennox Cameron, only to have him stare at her dumbfounded. Heartbroken, she accepted the proposal of a diplomat and moved to America, where she played the role of a dutiful wife among Washington's elite. Now a widow, Glynis is back in Scotland. Though Lennox can still unravel her with just one glance, Glynis is no longer the naïve girl Lennox knew and vows to resist him.

With the American Civil War raging, shipbuilder Lennox Cameron must complete a sleek new blockade runner for the Confederate Navy. He cannot afford any distractions, especially the one woman he's always loved. Glynis's cool demeanor tempts him to prove to her what a terrible mistake she made seven years ago.

As the war casts its long shadow across the ocean, will a secret from Glynis's past destroy any chance for a future between the two star-crossed lovers?
Excerpt

If regrets were ships, she’d have enough to fill the Clyde. Yet she had love as well. On balance, she had more love than regrets. She loved her mother, Duncan, Lily, and Mabel. They were all her family and would always have a spot in her heart. She adored Lennox. She always had. She knew she always would.
The sun faded behind Glasgow as if embarrassed, leaving a blushing sky behind. The Clyde reddened, mirroring the sky, bustling with activity as day turned into night: a barge belched upstream, a ship slid out of dock. Slowly, ships became shadows and spires in the darkness.
Stars blinked hazily in the sky as if rousing from sleep as the moon tucked itself behind the riffling clouds.
The air was warm, scented with roses and mint. A soft breeze caressed her cheek and danced up her skirt. Lights began to shine in Hillshead’s windows. She heard a frog’s low pitched bellow, the chirping of an insect, the rustle of something in the taller grass just beyond the garden.
How long had it been since she’d taken the time to simply hear the world around her? Not the chatter of people or the hum of voices. Not the clatter of wheels on cobblestones or the drone of engines, but the sound of nothing but life.
The beating of her heart in her chest, the indrawn breath and exhaled sigh, the clench of her fingers against the hewn wood of the bench were all signs of her own life. The temporary permanence of it, the proof of her existence.
In this instance, in this moment, in this exact time, she felt strangely more Scot than she ever had. She was as elemental as her ancestors, all those proud women who’d marched over the craigs and through the glens of the Highlands, determined to aid their men in protecting their homes. They’d done so clad in plaids and almost nothing else and here she was in a new dress, sitting outside a magnificent home built by one of their descendants. 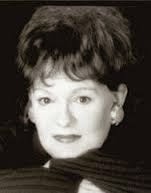 Karen Ranney began writing when she was five. Her first published work was The Maple Leaf, read over the school intercom when she was in the first grade. In addition to wanting to be a violinist (her parents had a special violin crafted for her when she was seven), she wanted to be a lawyer, a teacher, and, most of all, a writer. Though the violin was discarded early, she still admits to a fascination with the law, and she volunteers as a teacher whenever needed. Writing, however, has remained the overwhelming love of her life.