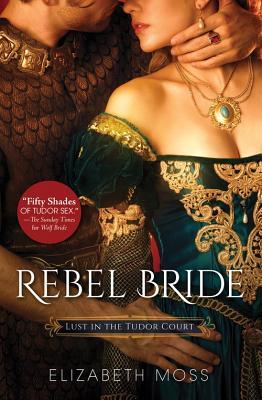 I’ve been wanting to read Elizabeth Moss since I heard of the first book in this series “Wolf Bride.” Although I didn’t get around to reading the first book, I saw wonderful reviews for it and also for “Rebel Bride.” This was my first time reading Elizabeth Moss so I was not sure what to expect but since I enjoy historical romances I was looking forward to this story.
I have to say that the story fell short for me. I really wanted to like and it seemed to me that the story sounded great. Susannah Tyrell sounded like the perfect heroine. She wanted to live by her own rules and did not want an arranged marriage. Hugh Beaufort also sounded interesting. He seemed the perfect opposite to Susannah’s impulsive nature. Where Hugh was dedicated to his duties Susannah made her own rules and wanted to be in charge of her future. Also, the historical back drop during the reign of Henry VIII sounded fascinating. The author included some fun and action filled scenes that made for perfect knight in shining armor scenario.

Unfortunately, the story did not work for me. Although the Tudor court is one of my favorite topics and it did affect Susannah’s relationship with Hugh because he is fiercely loyal to the king and his responsibilities. He, however, can’t deny what he feels for Susannah which proves to be a struggle for him. He is attracted to Susannah but he tries to be noble and respect the marriage that has already been arranged for her. One aspect of the story that I did not care for was the heroine. I didn’t like her and she seemed so flighty instead of strong and determined. She seemed to be all over the place. It seemed that every time she made a decision it landed her in situations where she needed rescuing. Also, although she kept rejecting Hugh’s marriage proposal for altruistic reasons I wasn’t really buying her story. Hugh was ok but he seemed as wishy washy as Susannah. He was supposed to be a strong and noble knight but he kept flipping back and forth he tells her if she doesn’t accept his marriage proposal he is gone for good-then he returns. Finally, I didn’t think they had great chemistry. I think that the author threw them together too quickly and I wasn’t overly invested in their story even though they did have huge hurdles to overcome. I know that a big theme of this story is the sex but even that seemed boring and not enough to keep me invested in the story. In truth I found it overly dramatic and the main characters not developed enough to make their struggles and their love story memorable, I felt very detached and at times bored.