In Flames by Richard Hilary Weber

Richard Hilary Weber, author of In Flames, on tour February 2015 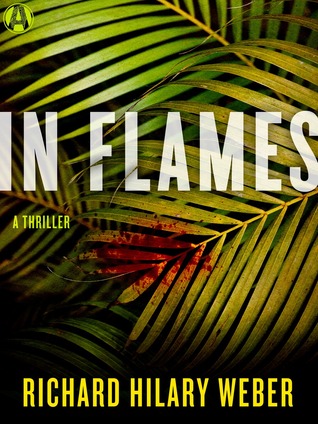 On Sale: February 03, 2015
Pages: 188
Published by :  Alibi
In Richard H. Weber’s passionate new thriller, a smoldering mystery ignites on a tropical island as lust, murder, and politics collide.
San Iñigo is a jewel of the Caribbean, a playground paradise for the foreign elite, a hell for unfortunate locals. For recent Princeton grad Dan Shedrick, San Iñigo promises the fulfillment of too many desires.
Dan hires on at a powerful American firm as a junior architect, but still finds time for tennis, booze, a reckless affair with the sexy wife of a resort owner—even a bit of reconnaissance for the U.S. cultural attaché. But soon he discovers that nothing on San Iñigo is without consequence. When a much-loved local radio personality is found on a beach with his head blown off, Dan’s lover becomes a suspect. And not long after his foray into espionage, he’s dragged away on a brutal journey into the heart of darkness.
Buffeted by aggression, depraved ritual, and personal betrayal, Dan discovers fierce truths about San Iñigo . . . and himself. In the island’s forbidding mountain jungle, his life goes up in flames—a deadly inferno that will forever change him, if he survives at all.

Three Stars
Copy received from TLC Book Tours for an honest review
"In Flames" by Richard Hilary Weber was short but satisfying. Although the story was only 188 the author packed a lot of different scenarios and was able to maintain a good balance. Weber's writing was engaging and the plot of the story well developed.  He was able to provide many well developed characters in this short story. He was also able to provide enough type of  action an suspense.

Anyone that is looking for a short but fun story with adventure will really enjoy this.  The setting was also interesting and the suspense/mystery intriguing.

Richard Hilary Weber, a native of Brooklyn and a Columbia University graduate, has taught at the universities of Stockholm and Copenhagen, and has been a scriptwriter for French and Swedish filmmakers. He lives in Provence, France.