Sinners and the Sea by Rebecca Kanner

Tour Schedule: http://hfvirtualbooktours.com/sinnersandtheseatour
Tour Hashtag: #SinnersandtheSeaTour
Publication Date: April 2, 2013
Howard Books
Formats: Hardcover, Paperback, eBook, Audio CD The young heroine in Sinners and the Sea is destined for greatness. Known only as “wife” in the Bible and cursed with a birthmark that many think is the brand of a demon, this unnamed woman lives anew through Rebecca Kanner. The author gives this virtuous woman the perfect voice to make one of the Old Testament’s stories come alive like never before.
Desperate to keep her safe, the woman’s father gives her to the righteous Noah, who weds her and takes her to the town of Sorum, a haven for outcasts. Alone in her new life, Noah’s wife gives him three sons. But living in this wicked and perverse town with an aloof husband who speaks more to God than to her takes its toll. She tries to make friends with the violent and dissolute people of Sorum while raising a brood that, despite its pious upbringing, develops some sinful tendencies of its own. While Noah carries out the Lord’s commands, she tries to hide her mark and her shame as she weathers the scorn and taunts of the townspeople.
But these trials are nothing compared to what awaits her after God tells her husband that a flood is coming—and that Noah and his family must build an ark so that they alone can repopulate the world. As the floodwaters draw near, she grows in courage and honor, and when the water finally recedes, she emerges whole, displaying once and for all the indomitable strength of women. Drawing on the biblical narrative and Jewish mythology, Sinners and the Sea is a beauti­fully written account of the antediluvian world told in cinematic detail.

My review:
Four stars
Copy received from Historical Fiction Virtual Tours for an honest review.
I really enjoyed "Sinner and the Sea" by Rebecca Kanner.  I fell in love with the cover and was so relieved that the story did not disappoint.  The telling of the story reminded me of "The Red Tent".  Kanner uses the themes from the bible to explain Noah's unnamed wife's trials.  Simplistically one can say that this is the story of Noah's ark from his wife's point of view.  In a way it is but it also creates a broader perspective to what this huge flood did to the people during this time period.
I thought that the author was able to push some boundaries and push the question of what is right ? what is wrong?  Would it change depending on the circumstances? Who are the "good" people?
As the story unfolds we see how Noah's wife grows into herself.  Her sorrow at being a burden to her father is very endearing.  My heart went out to her as she carried undue guilt about circumstances and situations that were outside her control.  The matter of the name reminded me of Toni Morrison's "Song of Solomon" and the power of names, what they mean, how they help to identify us, are they a burden or are they a gift?  This theme intertwined throughout the story and developed a story of it's own.
I read this book cover to cover.  The author's interview at the end was very enlightening and I can't wait to read about Queen Esther in her next book.  I love that the author is pushing for a woman's perspective in biblical stories and I love that she is not afraid of posing the difficult questions and providing unthought of or unseen female perspectives.  I really enjoyed this story and highly recommend it.


Praise for Sinners and the Sea 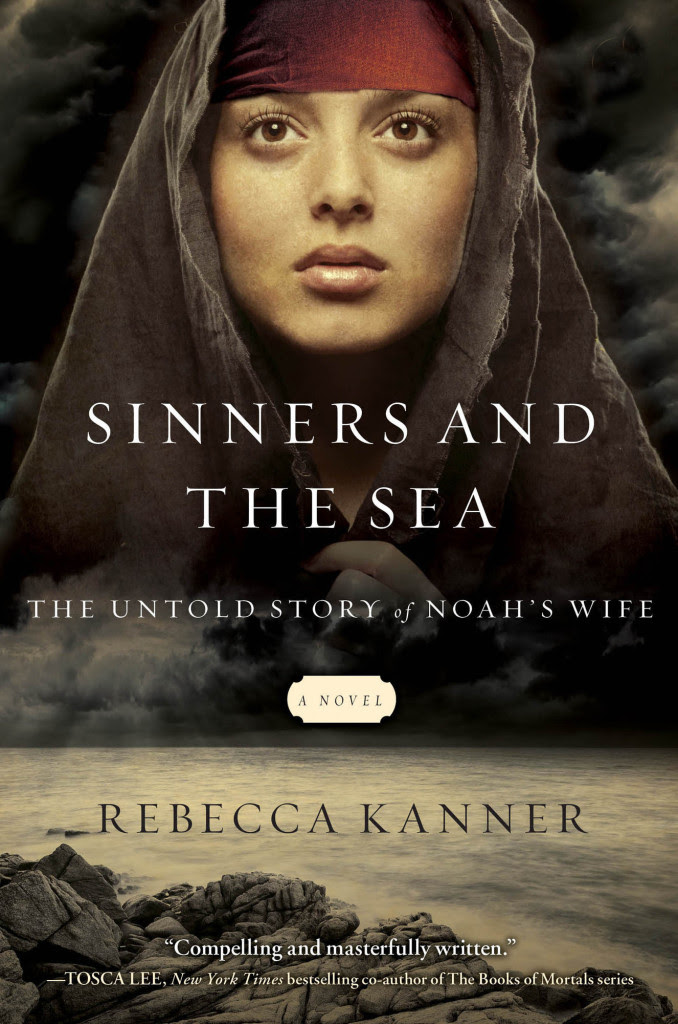 “Kanner animates a harsh, almost dystopic world of fallen people struggling to survive. Noah’s unnamed wife is a powerful, memorable character.” – Publisher’s Weekly
“[Noah's wife] proves her strength and character as she tries to protect her family… from the outside forces that threaten. Kanner successfully undertakes a formidable task retelling a familiar religious story through the eyes of Noah’s wife. The narrative’s well-articulated, evenly balanced and stimulating—but it’s definitely not the familiar tale that’s so frequently illustrated in children’s books” – Kirkus Reviews
“SINNERS AND THE SEA is a rare find–a bold and vivid journey to the antediluvian world of Noah. Kanner’s is a fresh, irresistible story about the unnamed woman behind the famous ark-builder. Compelling and masterfully written.” – Tosca Lee, NY Times bestelling author of HAVAH: THE STORY OF EVE.
“What a remarkable debut! Rebecca Kanner’s SINNERS AND THE SEA is a haunting, beautifully written story of struggle and redemption told through the eyes of the Biblical prophet Noah’s wife. Kanner pulls no punches: She gives us humanity in all its wickedness — bloodthirsty, greedy, cruel — and the horror and heartbreak the inhabitants of Noah’s ark might have felt as, unable to help, they listened to the screams of the dying and witnessed the utter obliteration of life on Earth. By the end of this book, I was in tears, for Kanner does lead us out of the valley of the shadow of death into a new world of promise and hope. SINNERS AND THE SEA is a profoundly moving tale, thrilling and fast-paced, and one of the best books I have read in a very long time.”- Sherry Jones, author, THE JEWEL OF MEDINA and FOUR SISTERS, ALL QUEENS
“Rebecca Kanner brings the antediluvian world of giants, prophets, and demons alive, setting her narrative in motion from the first chapter and never letting it rest. She is a writer of great dexterity, performing tricks at a full sprint.” – Marshall Klimasewiski, author of THE COTTAGERS and TYRANTS
“Kanner does a masterful job of penetrating the depths of the Biblical Flood narrative and weaving in the complicated reality of challenging relationships and longings for personal fulfillment. Her desire to go beyond the traditional understanding of the lives she explores introduces us to a courageous and insightful young writer whose first book will take its place alongside other exciting modern re-readings of the ancient Biblical text.” – Rabbi Allen of Beth Jacob congregation in Mendota Heights, Minnesota. Honored by Forward newspaper as one of America’s “50 most significant Jewish leaders”
“We think we know Noah’s story but he was not alone on the ark; what was the experience of his wife, his family? Rebecca Kanner’s vividly imagined telling recreates the world of the bible, and asks powerful questions about the story and about ourselves.” – Rabbi David Wolpe, Sinai Temple in Los Angeles, named the most influential Rabbi in America by Newsweek Magazine (2012). Author of WHY FAITH MATTERS
“We sympathize with this unnamed woman because—as remote as her world seems to be from ours—she longs for all that we want for ourselves: to be known, loved, and accepted by her family, her community, and ultimately her God… After reading Sinners and the Sea, you’ll never look at the Biblical story of Noah and the flood in the same way again, and isn’t that Biblical fiction’s greatest purpose? To see the old stories with fresh eyes and perhaps find new meaning…” – Stephanie Landsem, author of THE WELL
“Rebecca Kanner has created an autobiography of Noah’s wife, and an imaginative one it is.” – American Jewish World
“[Kanner] gives an intelligent voice to Noah’s wife.” – Jewish Book Council
“First-time novelist Kanner has written an utterly absorbing novel, one that flows seamlessly.” – Historical Novel Society
“A fascinating look into a feral civilization of turmoil and hardship.” – Historical Novel Review
“A stirring, fascinating story written beautifully.” – Historical Fiction Connection
“Kanner beautifully evokes life on the claustrophobic, smelly vessel. Riveting… It will certainly spark hours of book club discussions.” – St. Paul Pioneer Press

Sinners and the Sea is Rebecca Kanner’s debut novel. Rebecca is a Twin Cities native and holds a Master of Fine Arts in Fiction Writing from Washington University in St. Louis. Her writing has won an Associated Writing Programs Award, a Loft mentorship Award and a 2012/2013 Minnesota State Arts Board Grant. Her personal essay, “Safety,” is listed as a Notable Essay in Best American Essays 2011. Her stories have been published in numerous journals including The Kenyon Review and The Cincinnati Review.
Along with other authors including Anita Diamant, Michael Cunningham, Joyce Carol Oates, Russell Banks and Ron Hansen, Rebecca will be featured in the upcoming title Truthful Fictions: Conversations with American Biographical Novelists.
You can learn more about Rebecca, and find links to selected stories and essays, at www.rebeccakanner.com. You can also find her on Facebook and Twitter.