Secrets of the Alchemist by J.L burger 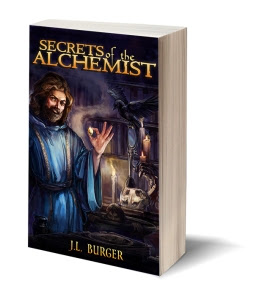 SYNOPSIS: What are Nora and Tomik to do? They’ve been transported 400 years back in history, and have no clue how to get back home. The members of the Royal Court refuse to let them leave – everyone believes that the children are wizards, come to save their struggling empire.
Well, not quite everyone. The wicked chamberlain wants to toss the children into the castle’s deepest dungeon. The crazed, witch-hunting duke is starting to look at them funny. But worst of all is the emperor’s prized alchemist. He just wants them dead – and has a bag full of sinister tricks to make it happen.
It looks like the only way out of this predicament is to save the empire, after all. But how? Nora will have to come up with some magic of her own, and fast – for his next trick, the scheming alchemist is planning to make the children disappear… forever!

It was at an early age that J.L. Burger discovered the secret to traveling in time. Since then, he has scoured the universe, searching for the deepest mystical knowledge, sowing discord and trouble along the way. He was most recently sighted in ancient Troy, making tasteless jokes about the hole through which the Greeks exited the rear of the Trojan Horse. His most horrific stunt of all, however, was grossly overcooking s’mores in his microwave last summer. Unfortunately, there are some mysteries that are not meant to be solved…
When not traveling in time and space, he resides in New Jersey with his lovely wife, two mostly-charming daughters, and two mostly-smelly dogs. He spends his summers in Europe, inspecting the most recent advances in medieval torture devices.

Five Reasons Why the 16th Century Was Better Than the 21st


In researching my book Secrets of the Alchemist, I discovered many interesting facts about life in 16th century Europe.  And I must say, I have come to disagree with those who marvel at how far mankind has come over the last few centuries.  It is true, of course, that our society has made advances in certain trivial areas such as technology, industry and medicine.  But there are many things from the 1500s that were simply… better!

Doesn’t he look awesome?  More importantly, he looks like he knows that you think he looks awesome.  Let’s face it – without the collar, he’d be nothing.  Getting dressed up like this is just totally logical.  How come nobody wears these anymore?

Ruff collars were expensive to make, and the bigger they were, the more they cost.  So it became a status symbol to wear as enormous and decorative a ruff as you could afford.  We call this “sticking your neck out for fashion.”  This lady may have taken it a little too far, though:
Hard to tell where neck ends and body begins…

-          Chamber Pots:  If you have to go to the bathroom in the middle of the night, what do you do?  You have to get up, climb out of bed and slog your way to the toilet in the dark, stubbing your little toe on some randomly-misplaced piece of furniture along the way.  Then you groggily climb back into bed, being soundly cursed by your spouse for making so much noise (no sympathy about the little toe, mind you!).

What did they do in the 1500s when they had to go at night?  They’d just pull one of these out from under the bed:
Watch out for people pouring these out of windows
Then they’d pee in it and chuck it out the window the next morning.  Some folks would go to the trouble of shouting something that sounded like “Gardey-loo” before tossing their urine out the window, just to make sure they didn’t soil any innocent bystanders along the way.  Very considerate of them.

So… stumbling, fumbling and toe destruction… or pull, pee and chuck?  Which sounds easier to you?

-          Banquets:  Okay, this is a bit unfair because 99.9% of the people in the 1500s never got to go to a banquet.  Then again, most of them probably didn’t wear ruff collars either.  But the stuff they did with food back then was hard to believe, not to mention the entertainment between meals.

Here are some of the more interesting things you might find on a wealthy lord’s banquet table:

o   Roast Peacock:  The fact that they ate peacock is weird enough.  But think about this:  They would pluck its feathers off, then cook it, then put all the feathers back in, so it looked alive.  I don’t think I’d be able to eat that, but I wouldn’t mind grabbing one of those super-beautiful tail feathers for my collection.
o   Boar’s Head (and I’m not talking about cold cuts!):  They would roast a boar’s head, then stuff flaming oil-soaked rags in its mouth so that it looked like it was breathing fire.  Suddenly, the hunted (and killed and roasted) looks like it has become the hunter!
o   Four-and-twenty Blackbirds:  It was not uncommon to serve a pie that, when cut open, would reveal some kind of special amusement.  Hard to believe, but the story of a flock of birds flying into the air from inside a pie is not an urban legend!  What would you like to find in your pie?
o   Ridiculous Ornamentation:  The stuff that was done purely for decoration was even more extravagant than the food.  There were fountains flowing wine, elaborate statues made of sugar, pastry cases large enough to hold an entire musical ensemble, and artificial trees of silver and gold from which fruits were hung and later served as dessert.  Like the ruff collar, this was mainly done to show that you were richer than the other guys at your banquet.

I realize that there are lots of outrageous parties these days, too.  But I haven’t seen any peacocks in their original plumage, or musicians baked into pastry cases.  Maybe it’s about time we gave it a try…

-          Castles:  I’m probably not the first guy to say this, but if we have so many highly-trained architects out there, how come the stuff they build today is so much uglier than the buildings that were built before anyone had ever heard of an architecture degree?  Just saying…

-          Magic!!!  Today we have machines that fly us across oceans, we have devices that allow us to see and speak to someone on the other side of the world, and yes, we even have vegetarian bacon!  And yet – let’s face it – none of this inspires even the smallest sense of wonder in us.  We have no magic.  Isn’t that sad?

In the 16th century, people were surrounded and astounded by magic.  Think about this: if you were to take someone from the 1500s and do something as simple as popping him a bag of microwave popcorn, he would either prostrate himself in front of you, or have you burned at the stake.  In either case, he’d certainly believe that what you had done was magic.  In fact, if you think about your typical day, you’ll find that most things you do during the course of your day would be considered magical by the folks from the 1500s.  So where has our magic gone?  Can we get it back?

This is what real magic looks like
So the next time you stick that bag in the microwave, say a magical incantation first.  And if you manage to pop it so that it’s not burnt, and there are almost no unpopped kernels, say a thank you to history’s great wizards, without whom none of this would have been possible.
- May 12, 2014