The Truth About Love and Dukes by Laura Lee Guhrke

I have read Laura Lee Guhrke before and everytime I read her I think,” I need to read her more.” Her heroines are always very unique and fun! I especially love that her heroines aren’t all from the same class and may even be considered “modern.”  I was super excited to see that this was the first in a series. I was instantly hooked on Henry, Duke of Torqui and Irene Deverill.

Irene although a part of high society is also part of the working class.  Irene has taken over her family business and runs a gossip column that is wildly popular. One of the topics of her column catches the eye of Henry, especially when the famous advice columnist, Lady Truelove’s encourages Henry’s mother to follow her heart and elope with a man below her station. Henry immediately searches out for Irene but he is nothing like he expected.

Henry is a Duke and he takes his responsibilities very seriously.  Henry is determined to stop his mothers wedding at any cost even if it means blackmailing Irene and buying her paper from her. Unfortunately for Irene, her father is more than happy to sell the paper to Henry but stopping Irene’s gossip paper is not the only thing that Henry is after. He is determined that Irene has to convince his mother not to marry and thus bring ruin on the rest of the family. Henry makes Irene and Clara, her sister, stay with him and his family in the hopes that his mother will come to her senses. What Henry doesn’t calculate is that being so close to Irene might be more than he can handle.

Guhrke’s books are always so fun and filled with witty dialogue, “The Truth About Love and Dukes” is no exception. Henry was a bit of a stiff but Irene was a perfect balance. I’m counting down to the next book in the series. 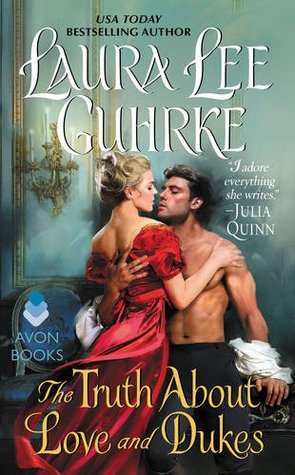