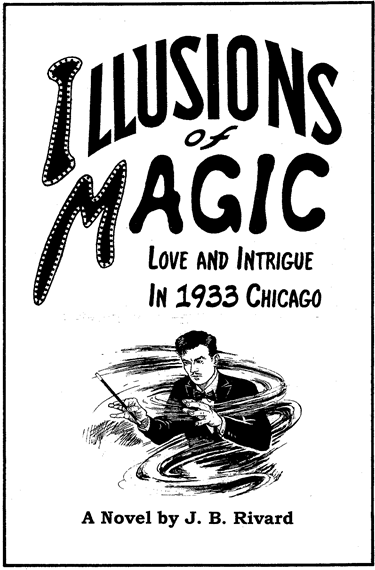 Illusions of Magic: Love and Intrigue in 1933 Chicago
by J.B. Rivard

The withering of vaudeville was bad enough in 1933. Because of the Great Depression, bookings for stage magician Nick Zetner disappeared. With his marriage cracking under the strain, Nick reluctantly accepts a devious banker’s deal: He earns a generous reward if he retrieves photos stolen during a break-in at the bank. Along the way, a love he thought he’d forever lost reappears. Despite his skill in the arts of magic, penetrating the realm of the thieves grows increasingly perilous, especially when it endangers his newfound romance.

Illusions of Magic seamlessly merges this tale with the true-life assassination attempt on President-elect Franklin D. Roosevelt resulting in Chicago’s mayor, Anton Cermak, being shot. His lingering death and a lack of legal means for his replacement causes great civic and social upheaval in the city.

“Illusions of Magic, set in Chicago in early 1933, does a masterful job of telling the highly entertaining love story between an out-of-work magician and his old flame . . . Rivard creates a historically accurate background for his cast of fascinating characters, creating a moving novel . . .” —Dr. Willard Oliver, Professor at Sam Houston State University and co-author of Killing the President.
“Illusions of Magic, a story of political intrigue in 1930s Chicago, is written in an informative, yet entertaining style. Rivard weaves into his narrative the true story of Chicago Mayor Anton Cermak’s murder and he does it with accuracy and complete authenticity . . . Each chapter powers along, insisting you read ‘just one more’ part. The taut writing has a ‘made for the movies’ tension . . .” —Mel Ayton, author of The Forgotten Terrorist and Hunting the President.
“[The] attempted assassination of Franklin D. Roosevelt in...1933...is part of the dramatic backdrop of Rivard's fast-paced and punchy novel....Nick Zetner's adventures, part screwball comedy and part Dashiell Hammett, combine with the richly authentic atmosphere of the setting to create a quick and very enjoyable read that smoothly intermingles Nick's love life with a challenging case he takes on for a corrupt banker. The book reads like a breath of fresh air - recommended.” -Joanna Urquhart, Historical Novel Society 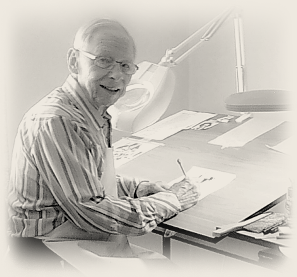 Almost everyone is familiar with the illustrations in "Alice's Adventures in Wonderland". However, the number of illustrated novels published--for adult readers--declined steadily from the beginning to the middle of the 20th century, although not for lack of popularity. "Illusions of Magic" dares a return to the edgy, swirling arts of the illustrated story, with pen and ink illustrations by the novel's author, Joseph B. "J. B." Rivard, supplementing this exciting story.

As a young child, Rivard began drawing by copying newspaper comics. In his teens, he drew illustrations for his high school's award-winning yearbook. He attended the Chicago Academy of Fine Arts and his artworks have appeared in more than fifty juried exhibitions, earning many prizes and awards. He's an artist-member of the Salmagundi Club of New York City.

Rivard's writing draws on wide experience--he served in the U.S. Navy, graduated from the University of Florida, worked as a newspaper reporter, a magazine writer, and on the engineering staff of a U.S. National Laboratory where he wrote and co-authored many technical papers listed on Google Scholar. His broad background supports a wide array of significant publications, from short stories to song lyrics, from essays to novels. He calls Spokane, Washington home.

For more information, please visit the Illusions of Magic website.

Monday, January 9
Blog Tour Kick Off at Passages to the Past

Tuesday, January 17
Interview at The Maiden's Court
Spotlight at A Literary Vacation

To win a paperback copy of Illusions of Magic by J.B. Rivard, please enter via the Gleam form below. Three copies are up for grabs!

– Giveaway ends at 11:59pm EST on January 27th. You must be 18 or older to enter.
– Giveaway is open to residents in the US only.
– Only one entry per household.
– All giveaway entrants agree to be honest and not cheat the systems; any suspect of fraud is decided upon by blog/site owner and the sponsor, and entrants may be disqualified at our discretion.
– Winner has 48 hours to claim prize or new winner is chosen.