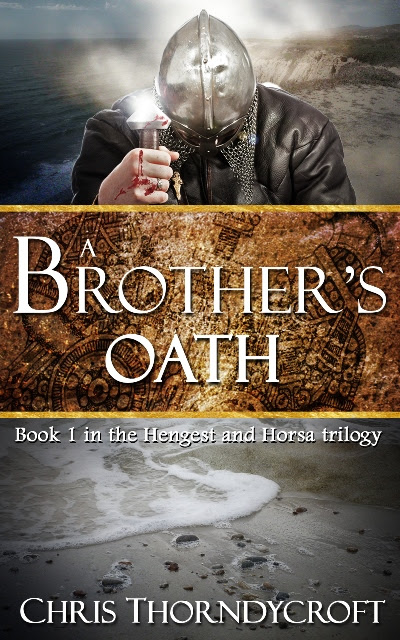 The Untold Story of England’s Beginning.

Denmark, 444 A.D. Two brothers – the cold and calculating Hengest and the intrepid but headstrong Horsa – find their separate worlds thrown into turmoil by royal treachery and an evil cult thought long dead. Reunited by an oath sworn in their youth, they set off on a journey that will define their destiny and set them upon the path to greatness.

When Hengest’s family is kidnapped by an unknown enemy, Horsa knows his oath has become more than a thing of words and he infiltrates the crew of one of the most feared raiders in the northern world to find out who took them. Meanwhile, Hengest struggles to unite his rag-tag group of followers into a united people. His heart yearns for a safe haven for his family; a land that he and his followers can call their own for generations to come.

This is the first part of the thrilling saga of the two warriors who spearheaded the Anglo-Saxon migrations to Britain and whose names became legendary as the founders of the land that would one day be called England.

"A Brother's Oath" by Chris Thorndycroft is the first book in the "Hengest and Horsa Trilogy".  I thought it was a great introduction to the 444 A.D. time period.  I liked the relationship between the two brothers and the quick pacing of the novel. Since I know very little about the Anglo- Saxon history I thought this book provided me with  a lot insight into the struggle of the warring parties.  Hengest was a great hero and I liked the insight that the author provided into his character and what drove him.  I loved that the story was action packed and that the author let the reader feel like a part of the story.

I look forward to reading more by this author and can't wait to see how he continues the story of Horsa and Hengest.

Chris Thorndycroft is a British writer of historical fiction, horror and fantasy. His early short stories appeared in magazines and anthologies such as Dark Moon Digest and American Nightmare. History has long been his passion and he began thinking about a series set in Arthurian Britain when he was a student. Ten years later, A Brother's Oath is his first novel under his own name and the beginning of a trilogy concerning Hengest and Horsa. He also writes Steampunk and Retropulp under the pseudonym P. J. Thorndyke.

Friday, January 29
Spotlight & Giveaway at Passages to the Past