Audiobook Review: Be With Me by J. Lynn, Narrated by Sophie Eastlake 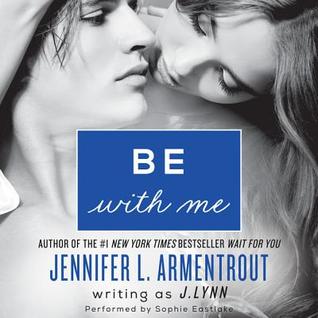 Before I get started, I do have to make two comments. One, “Be with Me (Wait for You series)” by J. Lynn has received amazing reviews, it’s one of the reasons I wanted to hear the audiobook. Two, New Adult is not a genre that I generally love.

When I saw all the great reviews for this story I was immediately interested and I couldn’t wait to jump in. I often would listen to the audiobook while I was running and I have to say about 30% of the story I was interested.

Teresa Hamilton was an interesting heroine. She is college kid who is suffering a knee injury. This injury is a constant reminder to her that she is not able to live out her dream and become a dancer like she has always wanted. Aside from that she has always had a terrible crush on Jase Winstead.

Jase is her brothers best friend and also very popular with the girls. When Jase offers Teresa a ride to her class because of her knee she reluctantly agrees but at the same time is really happy to spend time with Jase. This part of the story was cute and I liked Teresa a lot. I have to confess that the voice that the narrator gave Jase irritated me to no end. She made him sound like a poor little rich boy who was bored with life. I had to drop the story and months later I pushed through with the hope that I would enjoy it better. I can’t express how disappointed I was when I was on chapter 22 and realized I still had ten more to hear. I skipped some parts just to get to the end.

For me, the New Adult genre is tough. It’s my experience that all the books are the same as “Beautiful Disaster” by Jaimie McGuire. All the heroines are typical plain Janes and they end up with the hot guy that everyone wants. Really. I have yet to read one New Adult and that not be the story line. My second huge issue with NA is that everything is so melodramatic. It could be a sign of my age, but everything is the end of the world. Everything is “I am only happy and ok, when I’m with such and such guy.” Also, whenever there is intimacy, both parties are always so overwhelmed that they can’t control themselves. It’s like verbatim. The only thing that kept me going was Jase’s big secret, which I have to give to the author-it was pretty big. I was more interested in said secret coming out and what it would be like. After Jase and Teresa are finally together they have to deal with her brother not accepting their relationship and then another subplot is introduced. I applaud the author for bringing up important issues like abusive relationships and really think she did a great job of explaining the fear and shame that people feel. Kudos to her for that. The last half of the book was a series of subplots and more drama. Needless to say this was not one of my favorite stories. It just might be my last New Adult ever.

The narrator did a great job with Theresa. I thought she really got her character but -again-everything was overly dramatic. I’m confident that both J.Lynn fans and New Adult fans will really enjoy this story and the narration, but for me, it was very long and tedious.
- January 11, 2016