original post at : http://ramblingsfromthischick.blogspot.com/2015/10/arc-review-sinners-steel-by-sarah.html
“Sinner’s Steel” by Sarah Castille was my first read by this author. I’ve heard nothing but great reviews about her work so I jumped at the chance to read this and review it. This is the third book in the “Sinner’s Tribe Motorcycle Club Series” and although I have not read the previous books, I still enjoyed this book. I really love MC books and enjoy them, however I think they need to be done right.

Zane was an interesting character. He was a silent, moody, keep-to himself and at times jerk, type of guy. He came from a broken home and is determined to make something of himself. Evie had her heart broken by Zane and feels jaded by life. Evie is tougher now and her anger at Zane pushes her to move on with her life. She is carrying a big secret and eventually the truth comes out.

I had some issues with this story and I put it down and forced myself to finish. One issue is apparently Evie and Zane were best friends when they were kids. They fought their feelings for each other but eventually they gave in and took their relationship to a new level. Ok, so far. I really love friends to more type of stories. I even love those types of stories where they fight their feelings for one another. My first issue is that Evie doesn’t recognize Zane. He also doesn’t feel the need to say, “hi, I’m the guy from your childhood and the one you shared that very special night with.” When Evie and Zane reunite it was a little bit awkward. The flow of the story felt awkward and Zane felt awkward with Evie. I thought some parts of the story were overly dramatic and the author just had too much going on.

Although I did not love this book as much as I wanted to, I still plan to read more by Castille. She has a lot of other things going on while Zane and Evie try to figure each other and themselves. She presents some of the dangerous aspects of the MC world and it becomes a point of contention between Evie and Zane once they figure out where they want their relationship to go. Also, I have to confess, I love Joanna Wylde’s Mc books and I think she does great with the alpha males. Honestly, I thought some of the men in this book were immature teenagers. They should have been on bikes instead of motorcycles. I’m sure Castille’s fans will really enjoy this addition to the series and I’m going to stay put for the next one to see how it continues. 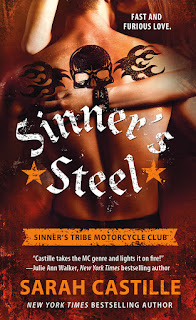