ARC Review: After the War by Jessica Scott 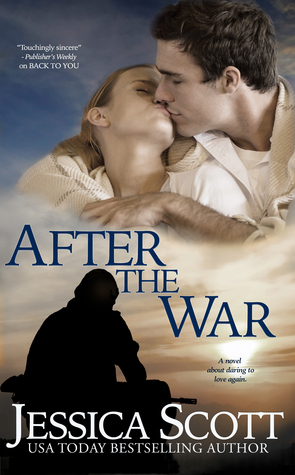 Whenever I see a book by Jessica Scott I jump at the chance to read it. I’ve read many of her books and have really enjoyed them. “After the War” is the second book in the Home Front Series. Just like the previous book “ Homefront” deals with the life of soldiers and the way their lives and their families lives have been affected by the army and combat.

In true Jessica Scott fashion, she presents very complex and multi-layered characters. Her characters always portray raw emotion and the raw truth of what life is like in the military. Captain Sarah Anders and Captain Sean Nichols are no exception.

Sean and Sarah use to date when they were still very young and both were still new in the military. Although Sean asked Sarah to marry him she said no. Sarah explains that she wanted to make something of herself in the military before she became someone’s wife. Sarah ends up marrying another soldier named Jack and they have a daughter together. Jack does not make it back from Iraq and Sean feels a sense of responsibility. When Sean and Sarah are reunited many of their old feelings come back but so do new feelings. Sarah realizes that Sean has grown and changed since they were last together. Sean realizes that he made the mistake of losing Sarah once but does not want to make the same mistake again.

Scott is very honest and raw about military life and about the impact it has on a person. Her heroes are often wounded and trying to become better people while battling their demons. She is also very candid about the pitfalls of the military, the chain of commands and the less than stellar conduct of some military personal. This includes people in command. Sarah is a recipient of unfair judgement placed on her by superior simply because she is a single mother. Her superior, although a woman herself, makes Sarah’s life as difficult as possible all in an effort to prove that women don’t belong in the military.

I have to say that although I really enjoy Jessica Scott I had a hard time staying interested in the story. One reason is that Sarah seemed almost identical to Melaine from Homefront. They were both single mothers and both portrayed the struggles of balancing motherhood and work. Their personalities were also very identical. Also, Sean and Gael, from Homefront, were also very similar. They both wanted desperately to make up for past mistakes. They also seemed very similar. I also felt that there were parts of the story that were very repetitive. Sarah and Sean seem to have the same conversation over and over. Although I really enjoy the realistic military-life feel that Scott gives many of the scenes and scenarios she described went over my head and I just did not understand.

Putting the above aside, I enjoyed reading about both Sarah and Sean. I kept hoping that they would find their way back together and loved that she had them rebuild their relationship based on friendship. I know that Jessica Scott fans will cheer with “After the War” and I’m personally looking forward to reading “Face the Fire” the next book in the series.
- May 11, 2015