Secrets for Seducing a Royal Bodyguard (The Renegade Royals, #1) by Vanessa Kelly

Two Stars
I started this novel with so much anticipation, which was probably my downfall. A couple of pages in, I put it down hoping that I would come back to it and like it better. I have to say I struggled with this book. The writing was very engaging but the hero and heroine were so dumb at times. I kept shaking my head and thinking, what are you thinking??
Ok, our heroine, Lady Vivian Shaw. When the story begins she is abducted, almost murdered. Aden St. George comes to rescue her, not because her family asked him to, but because Sir Dominic Hunter, a family friend did! Ok, so it starts off interesting. He rescues her and then she goes back home… Home is where her older brother Cyrus, very politically motivated tries to marry her off to Prince Ivan. Prince Ivan is a scumbag. He is always trying to put his hands all over Lady Vivian after repeatedly getting rejected by her. The cherry on top is that her older brother Cyrus knows all this and still gives Prince Scumbag his acceptance to court her???!! Lady Vivian is disgusted by the Prince for many different reasons, one of her main concerns is that they do not speak the same language, he is Russian. What? On My Goodness!
But the “villains” are not the only characters that I found very frustrating. Lady Vivian left me with my mouth open…. She suspects that one of her brothers and/or Prince Ivan are behind her abduction. So what does she do???? She goes back home where she finds none other than Cyrus and Prince Scumbag. Ok, I take a deep breath and think ok… let’s get behind the abduction… Let’s focus on who abducted her…Enter Little Brother Kit who has a gambling problem, along with their mother… Turns out that he and his mother both have big gambling debt that needs to be paid off. I mean jeez… All this story needed was a plague… Lady Vivian decides she will “fix” the problem by selling her jewels and using whatever money she has. After some convincing from Cyrus, she accepts the prince because it will help the family with their gambling and other debts. My question is why didn’t she just take her money and run. Lady, your life is in danger, you have money, go hide! So aside from all this crazy and whacky characters, including the heroine we have St George.
St. George goes to rescue Lady Vivian. I think yay! What a great hero. He is so overcome with lust that he seemed almost juvenile. The first couple of minutes upon meeting her it’s as if his brain is paralyzed. He sets his lust aside and rescues her and takes her back home. Lady Vivian is so overcome with gratitude that she makes snippy remarks at him the entire time. He offers to help her and tries to help her. He plainly asks her to share her concerns with him but she thinks that she can handle her situation. However, she does find time in her “gratitude” to reprimand him for flirting with another women at a ball… It seems that St. George is the only person Lady Vivian can standup to. Ironically, he is also the only one on her side. It’s very difficult to feel sympathy for Lady Vivian when she behaves in such a frustrating manner. Her family walks all over her and the decisions that she makes made me doubt her sanity. Or her just plain lack of common sense. I wanted to really like this book but I found it very trying. I love a good historical romance as much as the next person but I need an incentive to keep interested.
The one character that seemed to have hear head on straight was Lady Thornberry, St. George’s mother. She is the only one that understands the danger that Lady Vivian is under and appreciates her sons help. There is a little tension behind St. George and his mother and as the story unfolds we understand why. She was the only reasonable character.
Much of the story continues in this manner. There are more nonsensical decisions and more attempted abductions. I will say this, this story definitely had me very emotionally involved. Many times I found myself talking to the characters hoping that someone would come to their senses. For me, this story was more interesting because of the secondary characters and the suspense of the whole abduction scenario then the hero and heroine. 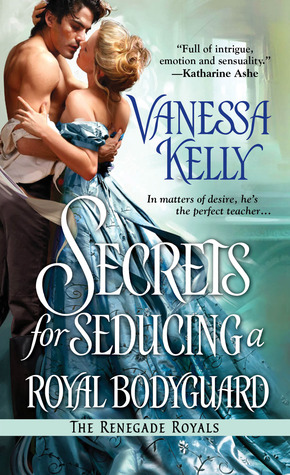