A Man Above Reproach by Evelyn Pryce

A Man Above Reproach by Evelyn Pryce
I really liked this story because it was a great combination of regency romance, history, and women's movement all in one. This story was very original and the plot, although complicated at times, very creative!
The Duke of Lennox, Lord Elias Addison is known as “ the uncatchable” because he is seen in society as very standoffish. He happens to visit a brothel, “The Sleeping Dove” with his good friend Lord Nicholas Thackerey. Lord Nicholas is there to visit “his” girl Sally. Elias is instantly drawn to Josie who moonlights as a piano player at “The Dove”. We later learn that she also owns a bookstore and has written a manifesto on woman’s liberation- On Society's Ills and the Real Price of Prostitution.
Josie ( Josephine Grant, the Bawdy Bluestocking,BB) has many aliases we later find out the meaning behind all these names and eventually her true name. We learn about her past and the many reasons why she has written such a controversial manifesto and why she plays the piano at a brothel.
Josie and Elias are perfectly matched. They infuriate each other, challenge each other and ultimately can't help falling deeply in love with each other. Both are hesitant to get their hopes up about their relationship because Elias is a Duke and Josie well ( all of the above). I loved the heroine because she was tough, smart and definitely before her time. As all true-romance novels, Elias and Josie eventually overcome their obstacles, overcome their own self-imposed obstacles and find a way to be together. I loved how the author explained the title of the story and how it was symbolic throughout the book.
Mrs. Pryce provided a great cast of characters. Elias' mother proved to be a force to recon with ( her involvement at the end of unexpected and very gratifying to the many themes throughout the storyline). Sally (Josie's shop assistant, “girl of ill-repute, and Nicholas' sweetheart) provided a great contrast to all the possibilities that were available to women of no titles.
Pryce later includes Sebastian's cousin and Miss Francis, although characters that are developed much later in the storyline, leave readers wanting to know more about their story! Also, she leaves lingering questions about how or if Sally and Nicholas are able to carry on with their relationship.
My only gripe about the story was Elias. He was always waving his titled around and was a little ( maybe a lot) sulky.
Overall, great story, fun and interesting characters, very creative plot, twist and turns that were surprising, and a great read! I would recommend and would like to read more from this author. 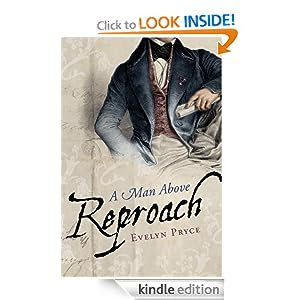