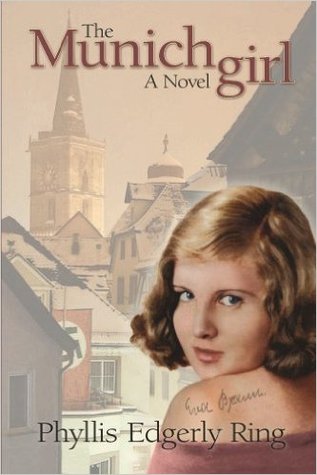 "The Munich Girl" by Phyllis Edgerly Ring was a fantastic read.  I was torn between giving it a four or three star but ultimately I felt happy with four.  I've never read Phyllis Edgery Ring before so this was a great introduction to the author.  I immediately liked two things: one her voice and two her writing style. Both really captured my interest and it made the story very easy for me to follow along. Ultimately the book is about three women: Eva Braun, Anna Dahlberg and Anna's mother.  Anna is the main character and it through her story that we uncover the others.  I liked Anna and going with her on this journey of discovery.  It felt very warm and comforting to read about how she reconnected with her mother's heritage and learned about her past.  My only angst with Anna was that she was such a doormat to her husband and  there were times that her gullibility seemed too far stretched, but I liked her and really wanted her to find her happy ending.  Hannes Ritter was an equally fantastic character. He seemed everything that Anna needed and he was a great vessel for her to reconnect with her mother's past.   The author breaks up the story into the present and then the second half is the past.  We hear about Eva and Anna's mother friendship and eventually Eva's relationship with Hitler.  Even though I really enjoyed this book and recommend it I had two big issues that had me thinking of giving it three stars.  One was Eva herself. It was my impression that the author was somehow trying to convince the readers through Anna, that Eva was a slighted woman in history.  Even though I have to agree that there are too many women slighted by history, I just didn't feel the same sympathize for Eva. It was very difficult to read about how Hitler gave her lavish gifts when there were so many people dying and tortured at the same time. I didn't feel the least bit sorry for Eva when she laments the inattention of Hitler when at the same time he was a despicable person that caused the death of many people. Eva's story was the least favorite and I personally didn't feel I benefited at all from reading about her.  Second big issue is that Anna 's family always had a portrait of Eva hanging in their living room. I can't help but ask, why the heck would anyone  want a portrait of her hanging in their home??? This was so insane to me... Even if it was valued at millions and someone gave it to me, I cannot find myself hanging in my home the portrait of a woman who had any type of association with Hitler.  Pushing these two issues aside... I enjoyed reading about the history of the German people, the effects that the war hand on families and how they coped.  Overall, good read despite the need to include Eva in the story.
- August 23, 2016