ARC Review: It Started with a Scandal by Julie Anne Long 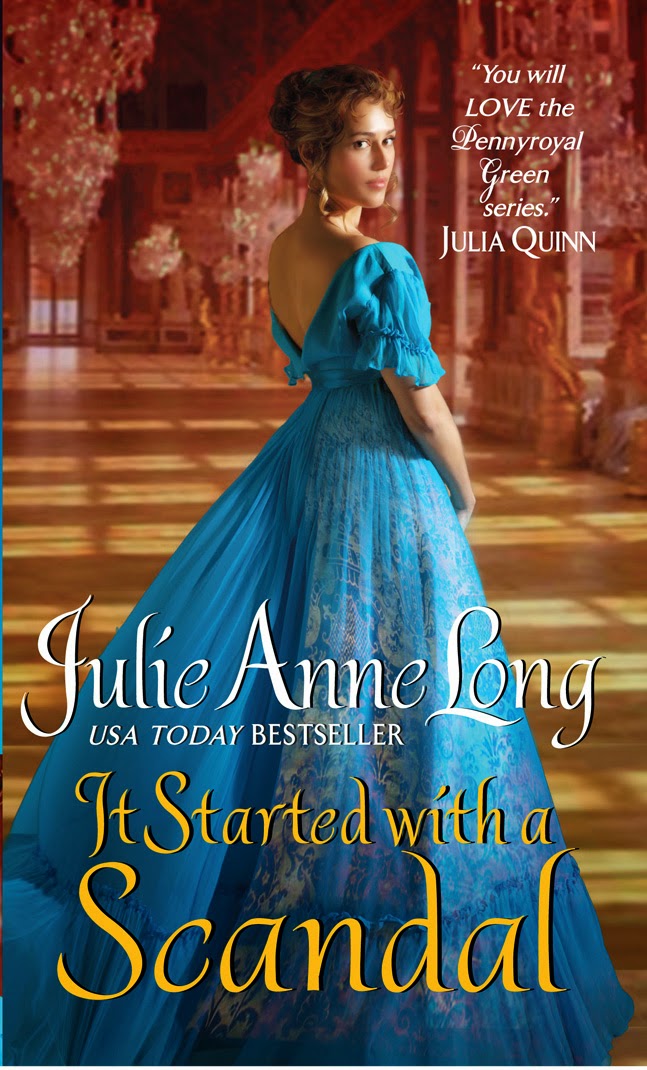 I started “It Started with a Scandal” by Julie Anne Long almost a year ago. I’ve read Long before and have to confess was not a big fan. I read one contemporary and one historical and neither one really worked for me. When I started “It Started with A Scandal” I left it off because I couldn’t really grasp the heroine and Long’s writing style felt very wordy for me. When “It Started with A Scandal” won the RITA for short historical romance my interest was piqued but I was reading something else and didn’t look for it in my files. One-day last week I stumbled across it and it blew me away. It’s been a while since I’ve woken up earlier than necessary to read and later than I should because I could not put a book down. Yes, I’ve read books I’ve enjoyed but this book was AMAZING. I guess timing is everything sometimes.

The heroine, Elise Fountain. She is a single mother. She was working as a teacher at a school for girls when she was fired because of her past. No work and with a child, Jack, she is forced to look for other means of employment. In comes Lord Philippe Lavay. Philippe is a member of the Bourbon family (aristocratic family in France.) He was a soldier and fought hard but through different circumstances his homes were taken away from his family and now he is living in England. Philippe is a very, very, very complicated man. He has physical and emotional injuries. Because of his very difficult temperament he is not able to keep a housekeeper to run his household; no one is desperate enough for the job. Except Elise.

Elise has the odds stalked against her. Her family abandoned her when they found out she was pregnant. She has no job because of an issue with one of her past pupils. She has a young child that needs her care and finally she just got a job that has been almost impossible to fill because of the very difficult circumstances of Lord Lavay. Fortunate or unfortunate for her, she has to make this job work even if it means turning the entire staff upside down.

I loved Elise. She was strong and very proud. She was determined to learn from her past mistakes but at the same time she didn’t let her past break her. She was a very strong woman. Even when her feelings for Lavay begin to overwhelm her, she is determined not to make the same mistake twice. Lavay was crazy. He was so difficult and infuriating but ultimately he was not match for Elise. He had very difficult choices to make because his sister depended on him. Because of the revolution, many of his family members have died and she is all he has left. This is a responsibility he takes very, very seriously. Long really took her time in developing Elise and Lavay’s relationship. Every conversation, every description was very precise and influential. There were so many beautiful scenes that I found myself highlighting paragraphs throughout the story. The banter between them is hilarious and lyrical. I have to say this is one of my favorite romance stories. I’m so glad that I came back to it and looked at it with fresh eyes. I’m currently in the process of re-reading it because I want to experience the story all over again! Fantastic and very memorable read.