*ARC received for an honest review
post originally posted on ramblingsfromthischick.blogspot.com
Four Stars
The Duke’s Quandary by Callie Hutton was a great read! I thoroughly enjoyed this great romance. The characters were interesting and the writing was engaging. I’ve never read anything by Callie Hurtton and was not sure what to expect, but I was pleasantly surprised. First, our heroine -Miss Penelope Clayton. Poor Penelope is a devoted botanist. She absolutely loves science and is filled with fulfillment when she is digging in dirt on her hands and knees. Luckily for Penelope she lives on outside of London in the country. She is able to do whatever she wants and spend all day on her scientific findings. She writes to The Linnean Society of London under a man’s name since women are not able to submit their findings. Penelope’s luck runs out when her aunt decides that she must find a husband and have a season in London. For Penelope this is horrendous news. She is very socially awkward and prefers the country. 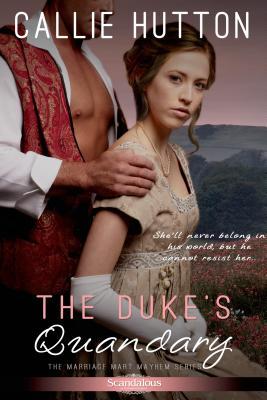 Drake, Duke of Manchester has recently become a duke upon his father’s death. He didn’t expect to have to fill his shoes so quickly or so soon. He doesn’t feel adequate and is consumed with worry about his three single sisters. The two oldest sisters are on their third and fourth season, he is worried about them not finding husbands. He informs them that they must find husbands this season. At first sight, Drake is very arrogant and full of himself. He bosses everyone, including his mother, around. He informs his sisters that they must marry even if it is not for love. Drake tries to handle his new duties as a duke and marry off his sisters when his mother informs him that Penelope will be joining them for the season. She asks that he introduce her into society and help her find a husbands. Obviously, we can figure out how excited Drake is about his new charge. Aside from all this task Drake decides that he has to find “the perfect duchess” to marry. He already has someone in mind and believes that she will fill the role of duchess perfectly and to his standards.

When Drake and Penelope meet it is filled with catastrophe. Penelope is socially awkward but also nervous, she also needs her glasses to see and on her aunt’s advice to look more fashionable, she takes them off in public. Needless to say it is a big embarrassing scene for Penelope and Drake has very little patience with her. At first it is difficult to see how the author can bring together such very different people, but she does and in a very endearing manner. Although Drake has decided to help Penelope (many times very unsuccessfully) he is really the one that changes. Luckily for him, his sisters are always quick to put him in his place, even when he is being a terrible jerk. His mother is also full of wisdom and offers him guidance along the way. Not to mention our heroine Penelope. This was my favorite part of the story. Typically authors would transform Penelope into a goddess and Drake would fall in love, but that is not what happens in this story and I really applaud the author for her creativity and authenticity. I really enjoyed the story and Hutton’s writing. I could not put the book down. I hope she has some ideas in mind for his sisters who were very fun characters. I loved the surprised ending, and was not expecting it! Definitely worth a read! Just try not to have any sharp objects, there are times when Drake is overly infuriating!