THE WALLFLOWER WAGER by Tessa Dare 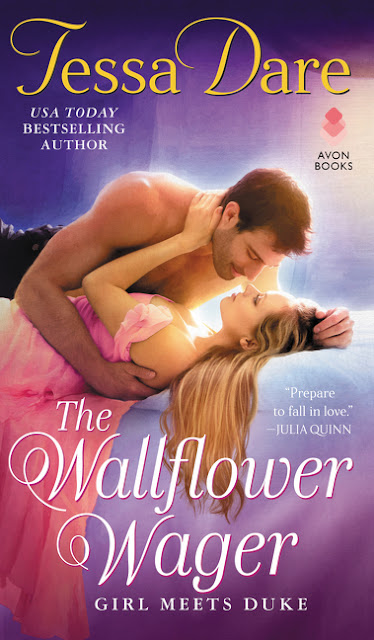 Cover Copy:
They call him the Duke of Ruin.

To an undaunted wallflower, he's just the beast next door.
Wealthy and ruthless, Gabriel Duke clawed his way from the lowliest slums to the pinnacle of high society—and now he wants to get even.
Loyal and passionate, Lady Penelope Campion never met a lost or wounded creature she wouldn’t take into her home and her heart.
When her imposing—and attractive—new neighbor demands she clear out the rescued animals, Penny sets him a challenge. She will part with her precious charges, if he can find them loving homes.
Done, Gabriel says. How hard can it be to find homes for a few kittens?
And a two-legged dog.
And a foul-mouthed parrot.
And a goat, an otter, a hedgehog . . .
Easier said than done, for a cold-blooded bastard who wouldn’t know a loving home from a workhouse. Soon he’s covered in cat hair, knee-deep in adorable, and bewitched by a shyly pretty spinster who defies his every attempt to resist. Now she’s set her mind and heart on saving him.
Not if he ruins her first.
Author Bio:
Tessa Dare is the New York Times and USA Today bestselling author of more than twenty historical romances. Her books have won numerous accolades, including Romance Writers of America’s prestigious RITA® award (twice) and the RT Book Reviews Seal of Excellence. Booklist magazine named her one of the “new stars of historical romance,” and her books have been contracted for translation in more than a dozen languages.
A librarian by training and a booklover at heart, Tessa makes her home in Southern California, where she lives with her husband, their two children, and a trio of cosmic kitties.
Excerpt:
She circled back, standing before him. “There now. Better?”
He gave a reluctant nod.
“Can you move your arm in all directions?”
He rolled his shoulder to prove it. “Yes.”
“What about your grip?
“My grip is strong.”
“Perhaps I should wrap the arm in a sling.”
“I do not need a sling.”
“Wait here. I’ll dash upstairs to fetch some linen and—”
“For the love of God, woman. My shoulder is fine.” He took her by the waist and lifted her straight off the floor, until they were eye to eye. “There. Believe me now?”
She nodded, wide-eyed.
“Good.”
In his hands, she was delicate, breakable. Her hair was a golden treasure he should never, ever touch. And oh, how he hungered for those soft, pink lips.
The familiar voice echoed in his ears.
Don’t touch, boy. She’s not for the likes of you.
Put. Her. Down.
But before Gabe could lower those beribboned pink slippers to the floor, she captured his sooty, sweaty face in her hands—
And kissed him on the lips.