ARC Review: Only a Duke Will Do by Tamara Gill

“Only a Duke Will Do” is the second book in the “To Marry a Rogue” series. This book was a two time first for me. It’s my first Tamara Gill story and also my first second chance at romance. I liked both.

When the story begins, Lady Isolde Worthingham and the Merrick Mountshaw,Duke of Moore are madly in love. Both are very young but it was love at first sight for both of them. Merrick asked Isolde to dance at a country dance and both knew they were made for each other! On the eve of their wedding they are ready to embark on a live of love and bliss together but it’s not long until all that shatters. Isolde’s life is shattered when she wakes up to screams and her fiancé in bed with one she thought to be a good friend.

Five years later Isolde is ready to come back to society. After that the disastrous night when Merrick married another she left for Scotland and has stayed away from London society. Now she is ready to reclaim her life and finally open her heart to another. It’s not long before Isolde and Merrick come face to face after five years and their feelings for each other have not changed.

I’m not usually interested in second chance romances but I was instantly invested in “Only a Duke Will Do.” The author provided a cliffhanger type plot at the beginning as we try to understand why Merrick, so much in love with Isolde and so ready to marry her and start a new life together beds her best friend. I think that “the cheating” storyline is very hard to redeem but Gill provided us with a very sad and miserable Merrick and as the plot unfolded, it became clear that he was simply a pawn in his now wife’s plans. Merrick is a devoted father and his only consolation is that his son has a good life. For Merrick being stuck in a loveless marriage is difficult but seeing Isolde having a season and ready to marry another was the true test of his strength. Isolde was equally as endearing. She was young and naive but also a pawn and the struggles that she faced with trying to move on but not able to deny her love for Merrick was heartbreaking. I wanted to know how they would both find their way out of this mess. I have to confess that they only reason I gave this three stars instead of four is because the last part of the book dragged on. I understand why the author did it but I would have liked the book more if the overly dramatic last part of the book would have been more straightforward. Nonetheless, this was an enjoyable read and I plan to read more books by Gill. Once I started reading I didn’t want to stop until I found out how these two would finally find their way back to each other. 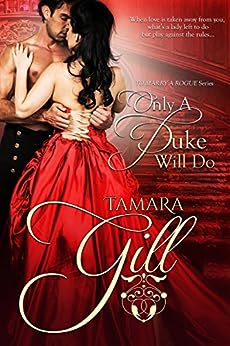