Branded As Trouble by Delores Fossen 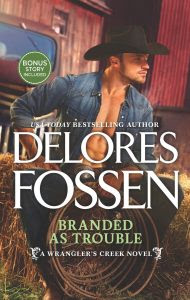 About Branded as Trouble

Series: A Wrangler’s Creek Novel
Mass Market Paperback: 384 pages
Publisher: HQN Books (June 27, 2017)
Every town needs a bad boy, and Wrangler’s Creek’s has been gone far too long…
Getting his high school girlfriend pregnant was just one square in Roman Granger’s checkered past, but it changed him forever. When his son’s mother skipped town after the birth, Roman decided to do the same, baby Tate in tow, hoping for a fresh start.
Now Roman fears his teenage son is following in his wayward footsteps, so he returns home to Wrangler’s Creek, aiming to set him straight. It’s there he encounters Tate’s cousin Mila Banchini, the good-girl opposite of Roman who’s had a crush on him since childhood. The old spark between them undeniably never died, though Roman worries it’ll only lead to heartache. But if falling for Mila is such a bad idea, why does everything about holding her feel so right?
“Clear off space on your keeper shelf, Fossen has arrived.”
-New York Times bestselling author Lori Wilde

Four Stars
Copy received from TLC Book Tours for an honest review.
I've long been a fan of Harlequin Books since I could remember.  Their books are always filled with romance a treat to read.  Although I frequently read Harlequin, this is my first time reading Delores Fossen!  Luckily for me it was a great treat to experience her writing.  I loved the second-chance romance storyline.  I also loved to see how Roman grew and changed through the years and ultimately how he handled his sons decisions.  Another aspect, aside from the second chance romance, is the cowboy setting in Texas.  Although I never been to Texas, the images presented by Fossen make it very romantic and earthy.  I personally love the bad boy falls for the good girl scenario and Fossen definitely follows that example.  Although  Roman has very strict rules for how long he will stay with a woman he seems very conflicted when it come to dealing with Mila.  Mila is nothing like Roman and that is one of the reasons he is so drawn to her.  I loved the chemistry between both characters and I like the person that Roman ultimately became.  I really enjoyed and recommend this sweet and heartfelt story.  Fossen really pulled at my heart strings and many times I found myself sighing with the many tender moments that make up this sweet romance. 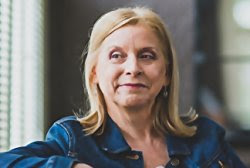 USA Today bestselling author, Delores Fossen, has sold over 70 novels with millions of copies of her books in print worldwide. She’s received the Booksellers’ Best Award, the Romantic Times Reviewers’ Choice Award and was a finalist for the prestigious Rita ®. In addition, she’s had nearly a hundred short stories and articles published in national magazines.