If I Say Yes by Brandy Jellum 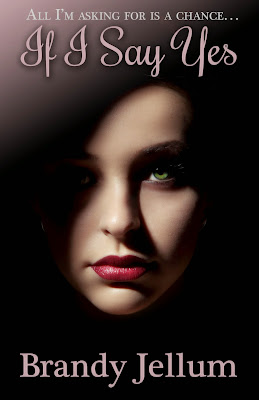 Blurb
Elizabeth Lewis was the child of Hollywood’s darling couple, until her father murdered her mother.
Six years later, she has traded her flashy, luxurious lifestyle for one of safe anonymity as a literary agent. With a different name and appearance, Liza Winter is living the life of her dreams—one where she’s known for who she is instead of what her father did. Except her apartment should be condemned, her car only starts when it wants, she hates the romance genre she has been assigned, and the CEO’s deliciously attractive nephew is out to ruin her carefully laid plans.
Reid Harder has never met an obstacle he couldn’t overcome. When his new position in the romance department comes with a benefit his uncle didn’t mention, he decides to wage a war against the intelligent, beautiful Liza to destroy every argument she has for turning him down. Still, the closer he gets to winning the prize, the more he realizes that the woman is keeping secrets that may endanger not just her life but his.
Will Liza overcome her mistrust of Reid to reveal her secrets before he learns the truth and walks away? Or will a grudge-wielding apparition from her past make her the next deadly Hollywood headline?


My Review
Four Stars
Copy received from Tasty Book Tours for an honest review
I get giddy everytime I discover a new author that I love!  Brandy Jellum is definitely that kind of author!  This story "If I Say Yes" was so well-written and the plot so well- paced that I flew through this story.  The story is easy to get into from the first page.  At first I thought that the idea of a woman hiding her true identity because her parents were high-profile would be too much, but the story line was believable and enjoyable.  I loved the characters! Liza was a great heroine.  Her worries and concerns were believable.  Reid was a great male character.  He was a little too self-assured sometimes but he had great chemistry with Liza.  I also loved that there was a theme of mystery surrounding the story.  But the romance and the chemistry were well balanced.  I really enjoyed and highly recommend this story.  I will be reading other books by this author!

Brandy’s passion for writing began long before she actually sat down to write. As a child, she has had an obsession with reading, everything from the classic stories by Jane Austen to YA Fiction by Richelle Mead. Finally, in 2012, she decided to create her own stories for people to fall in love with. Brandy bounces back and forth writing both Romance and Young Adult Fiction (which is mainly just for fun).
At the beginning of 2014, Brandy signed a contract with publishing company Booktrope. She is very excited about the next chapter of her life and cannot wait to share her books and passion with readers.
When she isn’t writing, she can be found chasing after her husband, her four children and her black lab, Diesel. Or curled up on her favorite corner of the couch with her newest book.