That Scandalous Summer (Rules for the Reckless, #1) by Meredith Duran 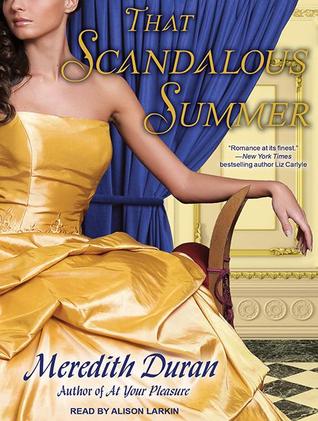 When I read “Fool Me Twice” by Meredith Duran over two years ago, I was hooked! I loved the story and I couldn’t wait to read “That Scandalous Summer” because it was the first book in the series. Duran is a very talented story teller! If anyone has not read her they are missing out!

“That Scandalous Summer” was a roller costar ride for me. I’ve been waiting for this story for so long that I was so happy when I finally received an audio version for review. The heroine in the story is Elizabeth Chudderley. Elizabeth is a very interesting character. She is a widow and a social flirt. She is known for her heavy drinking and partying ways. Elizabeth’s life of merriment is cut a little short when she receives the news from her solicitors that her financial situation is in dire need of help. Elizabeth’s only option is to marry. But she can’t marry just anyone, she has to marry someone with heavy pockets. This is not a great task for Elizabeth, she is beautiful, popular and very charming.

In comes Lord Michael de Grey. Michael is not wealthy. He is the second son and a doctor. His hospital is funded by his older brother Alastair. Michael and his brother had a very difficult upbringing. Their parents had a very ugly and loud divorce. It caused a great scandal in the ton and bother Michael and Alastair dealt with the brunt of the ugliness of their parent’s relationship. When Alastair becomes a widow, his own wife’s affairs come to light and with those affairs Alastair’s wrath. No one is spared, not even Michael. They fight and Michael refusing to bend to his brother, leaves for the country.

Michael is a country doctor and living a quiet country life when he finds Lady Elizabeth drunk in his front yard. Instantly the chemistry between them is evident and Elizabeth thinks it could be fun to have a little affair with “the country doctor” until she finds a rich husband. Michael is tempted by Elizabeth but eventually they give into their mutual desire. That’s just when the plot starts to unravel! Elizabeth finds out who Michael really comes from and his real identity, but he doesn’t have any money and won’t solve her financial situation.

I have to confess there were moments when I found that the story dragged on and I found it a little too convoluted. But Duran always has very intricate plots and this plot had so many different parts to it. First, we really had the chance to see Elizabeth grow from a pampered and stuffy high society lady to a self-less woman in love. There were moments of growth for her character that helped me come to like her as the story progressed. Michael was a pretty concrete character throughout the story but there were parts of him that also unraveled. My favorite parts were when the author begins to hint at the next book in the series, “Fool Me Twice” which is fantastic! The narrator, Alison Larkin is a greater reader! I thought she really understood and identified with Elizabeth’s character. I’m a fan of her audiobooks! Nonetheless, one can’t go wrong with this story. It’s really a great plot, great characters and I can happily attest, a great series since I loved both “Fool Me Twice” and “Luck Be a Lady.”